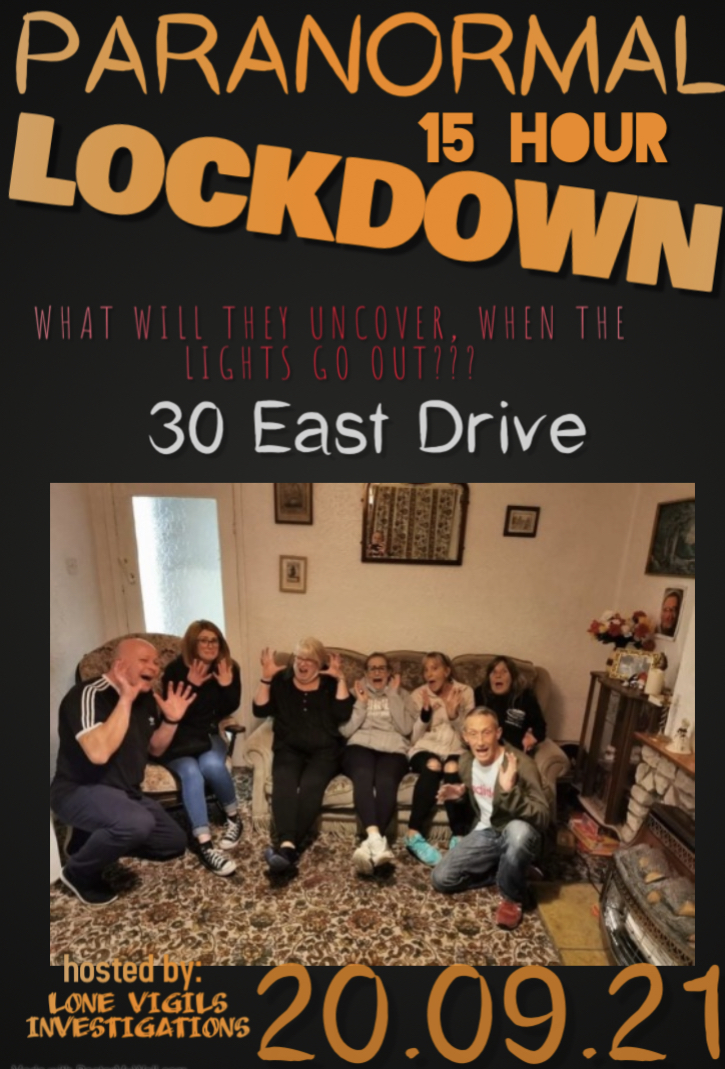 So after a rather eventful set up with Chris on his own for a few hours inside the infamous 30 East Drive, guest's arrived & we conducted our group photo & white light protection inside the famous front room.... The darkness had soon descended upon us all and armed with only our k2 & senses we began to call out to the infamous "FRED"... A k2 placed between the front living room doors and the kitchen was responding everytime we mentioned "FRED" and they got stronger & stronger with even the indicator on the k2 meter ganging right the way to the top on the red light.... It kept coming & going and as different guests getting different feelings including coldness across there knees, shadow figures seen through the glass door in the corridor, whistles on response, touch of a guest's hair & constant taps & dragging coming from the bedrooms above us..... We decided to then change our route & try communicate with the "old lady" of the house which immediately brought us results.... A mist formed in the corner by a gentleman who was sat in the armchair to which the "old lady" is associated with along with a coldness felt by the gentleman sat in the armchair and then low & behold one guest taking a photo to try and evident this mist and the photo she took showed us a mist at the corner of the chair.... We felt the need to then head into the corridor which led up to the infamous stairs where pushchairs & even the small grandfather clock had been pushed down..... Immediately as the guest's got accustomed to the corridor and we began calling out we could here shuffling up at the top of the stairs, we decided to place a REM pod on the landing but during this whole call out session, it wasn't triggered.... As we moved upstairs towards the movements we had all heard, we had noticed what looked like a chess peice to be on the floor and no guest's had felt it hit them or feel of them stand on this and we could interpret this as one of the movement we had heard whilst stood in this corridor..... The hours had flown by and noticing it was 11o clock, everyone decided to take a break as the activity had dwindled slightly.... We all then headed upstairs whilst 2 guest's stayed in the front living room to conclude any evidence caught between each level... As we called out, movement was being heard between the rooms we had spaced out between everyone who was upstairs but still no trigger from the REM pod.... We decided to conduct a SB7 spirit box session and the words "black monk" was heard but no major activity was really taking place until Chris had thought he had seen what looked like a fingers peering round one of the door frames..... What then astounded us all was about 20 minutes later a guest took a photo from the middle bedroom out onto the landing and a hand was spotted peering from around the frame, we were all in shock but one eagle eyed guest noticed the shoe of Chris at the bottom of the picture.... DEBUNKED and we were all gutted as we thought we had caught a brilliant peice of evidence.... As we then split back up into different group, 2 of our guest's had headed to the middle bedroom as it felt very strange and as they conducted a call out session there was no response but one guest again felt what like a touch on the top of her head.... This lead to her hastely retreating from the bedroom.... We carried on with a few other experiments including table tipping & spirit box sessions but all seemed quiet.... We vacated for another break as time had passed to 1:30 and once we had recharged our energy a brave 2 guest's headed up to the middle bedroom again whilst the rest of the guest's placed themselves strategically on the stairs and began a call out session along with the laser grid pen & portal spirit app.... Again very quiet but definite words coming through including "monk"... The time seemed to fly by and looking at the clock after spending another good amount of time inside the front living room without much activity happening we all then retreated to our beds for the evening & a few hours sleep.... Overall the night started very active but seemed to dwindle.... Did the "black monk" make an appearance?? Only the team & guest's can decphire that..... Massive thankyou for all the guest's who made the night an enjoyable one.... GO TEAM 30 EAST DRIVE
lonevigilsinvestigations@gmail.com