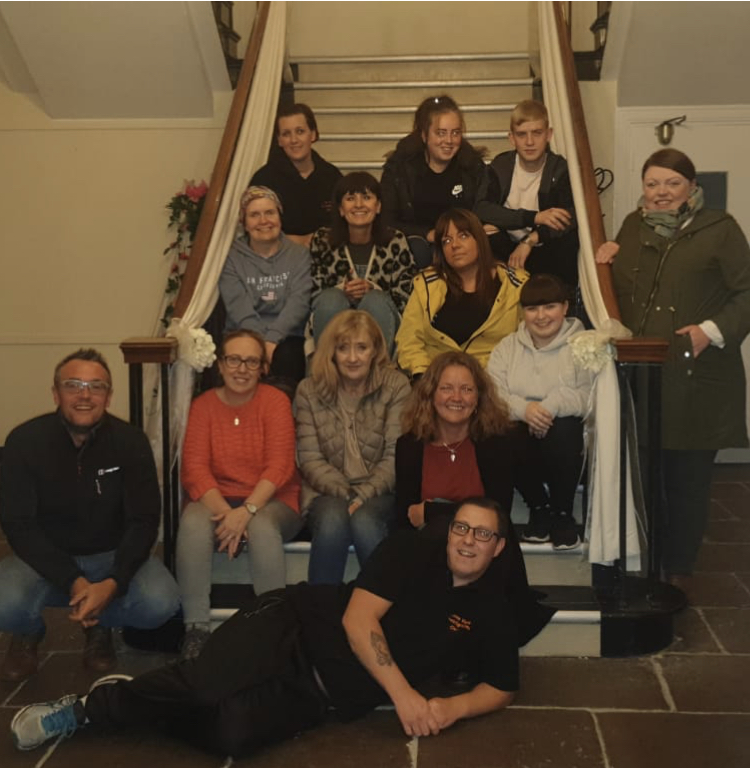 Following the long and dark driveway leading to the amazing building of Backworth Hall, felt like unseen eyes were watching us drawing closer to the building and the gorgeous grounds it is situated on.

We began the evening on the top floor with our white light protection which led to calling out, listening to the buildings noises along with opening our senses. We had no responses with the K2 and all was very quiet. Temperature fluctuations were recorded along with a few guests seeing a figure peering around the door way watching in on us. This then followed onto some guests sitting out the room onto the stairway, where some shuffling was heard. The question was asked for the spirit to confirm they were with us by moving the chandelier...We were amazed to see this begin to happen. A couple of guests picked up on a figure on the stairs but we had no responses to confirm this.

A guest had informed us that in the ladies toilets, a very strong smell of cigarettes was smelt which soon disappeared. This was picked up on over a few times during the night. Some gathered in the toilets and felt the spirit of a shy lady was with them and they also heard some shuffling in the cubicle when all was still and quiet.
During this time a couple of guests had gone to the kitchen area and were spooked when they heard a heavy movement near them.They did confirm they were the only ones around this area at the time and couldnt explain what this noise was.

Throughout the night, the building remained very quiet with that sense of being watched and came across cold sports and quite large temperature fluctuations where we were able to rule out any open windows/drafts. A few guests also had the sensation they had felt a breath on their hand or their head a few times, along with the sensation of their hair being pulled.

Down in the basement, guests picked up on the smell of cigarettes once again and a couple felt like their clothes had been pulled or tugged on. We continued in the basement to use the Ouija board, with quite some patience the planchette began to move very slowly but got no response from it and guests soon felt the energy remove from the planchette. When asked the spirit to confirm they were with us, 2 loud knocks were heard. We felt a spirits presence with us but were unsure if there was enough energy for the spirit to work with the Ouija Board. This led us to try a SB11 session. Very little came through this, however the name David came through who told us that 3 spirits reside in the building.

We all settled on the middle level of the building in the tea room, guests picked up some figures on the SLS camera and a guest felt the spirit of a little girl named Isabelle. This soon became good evidence. Our K2 teddy bear was placed near to the figure the SLS was picking up and had a couple of fluctuations. The K2 on the table also had activity too. During this time, we realised that the REM POD that had been placed in the empty entrance hall had been triggered and this led to a spirit box session when the SLS picked up on a figure believed to be a man.
What was really impressive was the spirit box confirmed the name Isabelle, who also told us the name Andrew but this was all we got through the Spirit box. Table tipping in this area had slight movement but we couldnt rule out this was possibly down to uneven floor.

Guests soon went back to the Basement area where we had strong responses on the REM. This continued for about 5 mins and guests felt this was possibly David making himself known. Then all of a sudden the contact broke and all remained quiet with the equipment. During this time, some guests had gone back to the top floor where the SLS had picked up another figure on the table, which looked to be dancing. When asked to confirm they were there by touching the guest next to them on the head, the figure on the SLS did exactly that.

All in all, our night at Backworth Hall was certainly a quiet night but we all came away with some good evidence and some experiences.
We would like to thank all those who attended the night for pushing through with the energy and commitment and dedication to find evidence. Your positive energy was exactly what the spirits needed to give us the little experiences we all had during the evening.