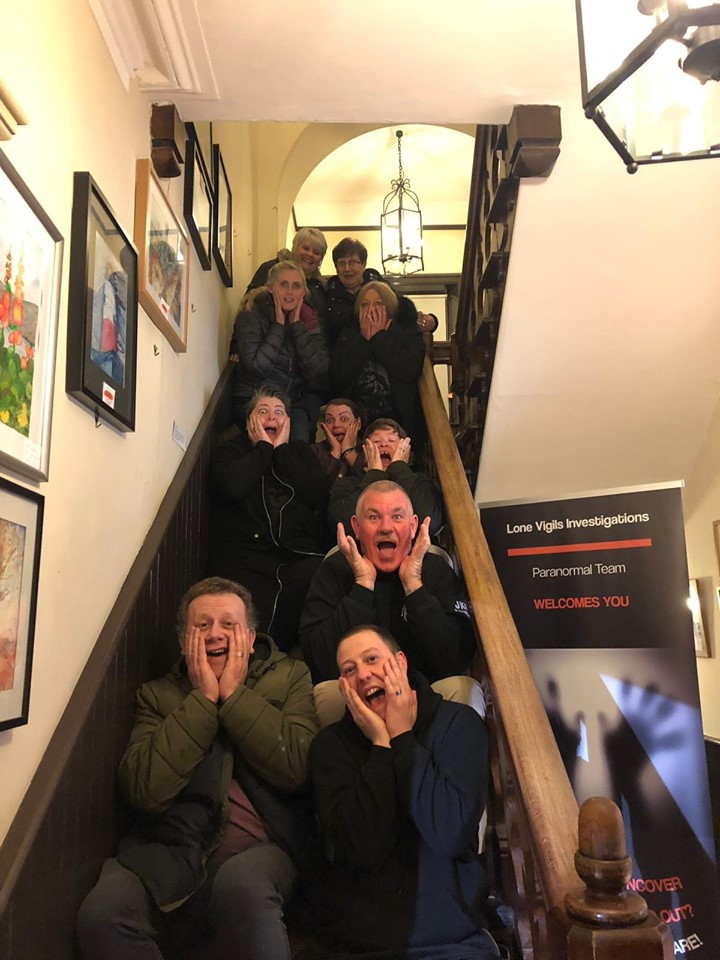 So our trip up to Gateshead & the wonderful Bensham Grove through up some interesting & factual finds....... let's begin

So as we start with all of our Investigations with our white light protection as soon as we had finished 1 of our guest's spotted a face in the cabinet in the main hallway & went to check this and couldnt find an explanation to what he had seen. What a cracking start. We all then headed into the library room where we all settled down around the table and gathered the buildings sounds and then introduced ourselves to the spirits. The buildings showed no sighs of creaks or taps and as we were doing this movement outside in the hallways & back rooms began. A sense of warmth was felt by all in this room, was this the loving family houses energy that still resided here? A dragging sound was heard by all and lights were also seen by the TV which tied on with a team member sensed stood by there. As we carried on asking out to the spirits a lady then thought she witnessed a cat pass by the door when no animals were in the building. We then moved onto the adjacent room whilst 2 team members stayed in the library and during this time thought we heard the word "NO" being said twice when a question was asked to one another. As the group continued in the room next door a couple of shadow figures where seen by guests one very pronounced stood behind the chair someone was sat. One guest then noticed as questions were being asked the lamp shade above us had started to sway on it's own accord which then was witnessed by everyone. As this was happening a guest and team member then announced they could hear a bird sound in the actually in the room, we checked if we could hear any birds outside but we could hear nothing. A shadow was then seen flitting outside in the corridor between the staircase followed by multiple taps in the corridor running adjacent to the room we were all in. A light was also then spotted above a guest's head.

Guest's then started to disperse thoroughly different areas of the building. The following activity happened

* A personal message came through to a guest in the pottery shed whilst a pendulum was being used which was affecting guests emotionally.

* The spirit portal was used in the hut and were told to get out with also a response to a question regarding animals & the words " yes horses" clearly heard. Also possible boy who was 14 who was a criminal and had lost his hand aswell as a kitchen worker(this was both verified at the end of the night by our historian of the building karen) Easter was mentioned and when asked if he had received any chocolate a very pronounced NO came through. The portable SLS was used and a stick figure was picked up at the front of the hut.

As we all grouped back together a human pendulum was started and a lady of the house came through with many yes & no answers including did she have children. A guest also sensed a feeling of neck injury which was confirmed due to a horse incident. The guest who took part in the middle of the pendulum also become very emotional aswell as the guests actually in the circle moving also. A shadow figure again was picked up on the stairs so a member of staff located the MEL meter there and activity started pretty much straight away on it with the REM aerial lighting up all the way to blue. Was this the lady of the house who iseen often on the stairs. We then all moved into the hallway by the stairs where the MEL activity was happening and we had guests using the table which then began to tip in front of everyone and then was rocked into the library room, at the same time as the table being moved the MEL meter was still experiencing activity on the stairs.

We then took part in a ouija board session and some guests who didn't want to take part in this went of in another part of the building on there own. Although the guest's felt some kind if energy there, there was actual no response from the planchette moving or answering our question wo which the board then was closed down. We tried then to recreate the table tipping we had earlier in the night but to no avail. We all then grouped back in the library where a spirit portal session took place & the names of Edward, Anne, Tom & Christina were heard. Was this possibly the children of the house? As this was happening a guest who was sat down around the table felt a touch of her hair. As we continued asking questions the words "GET AWAY" & also a member of staffs name was said to which we asked do you want Clare to go upstairs on her own & the answer to clares disappointment was "YES"

Whilst upstairs a spirit light was seen along with again footsteps & dragging coming from the attic. A voice was heard clearly with no one in the area at the time at the same time as shuffling actually in the room. Guest's then joined upstairs to which a spirit was more pronounced when normal chit chat was taking place & not direct questions being asked. One guest seemed to be picked on more than others as bangs underneath the floor where right next to herself which at 1 point made her want to flee the room.

Overall a fantastic night of activity with a group that was full of energy right till the end.