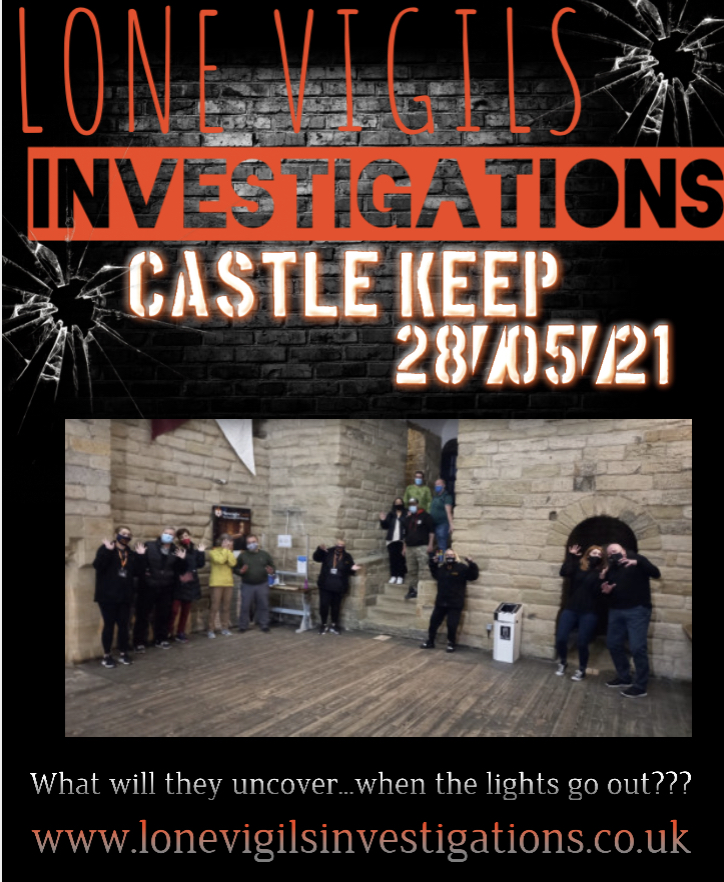 Cam's group
We all started the night with a white light protection in the Grand Hall.
My group then went down to the lower levels in the Chapel and Garrison room.
We started with a call out and our guest who is a skeptic began to feel strange tingling sensation which he couldn't describe. Another guest Andrew also felt the same in that area. We continued calling out and heard a few little noises but couldn't work out if this was paranormal or not.
We moved across into the Chapel and for some strange reason, the lights would not turn off. The guys who look after the keep, shut all the electrics off but this was still lit. We persevered and my guests tried to use the ouija board. We got no activity on the board but we were all aware of a sudden scent of sweet flowers. It was moving round and then went. We moved into the room just off the Chapel and I saw a dark mass to the left of the entrance just out the corner of my eye. I had previously seen this energy peeking through the doorway. We called out and had the rempod but nothing other than the sweet smell of flowers again.
We tried a spirit box session but the batteries had drained and needed replacing.
We cut to a break and switched locations with a nother team.
We went into the queen's chambers. We took our new mirror with built in rempod. Each guest had a go and all but one had an experience. Even our skeptic, which he is unable to explain. Have we changed his opinions?
The guests encountered 2 men and a lady in the mirror. One of the men appeared strong and heavy in stature, he had a rounding face, beard, looked like he was trying to over power the lady who came through at the same time, but she wouldn't let him. The faces were seen by all guests. The rempod also triggered a few times during the mirror scrying.
We tried a spirit box session with the sb7, fresh batteries, but didn't get anything.
We tried another session on the board but there was nothing.
We radioed through and arranged to switch locations with another group. This time we headed to the Grand Hall. We went into the side room where the treaty box is held and on the wall is a picture of sir John marley. The guests all said he looked like the man they had seen in the mirror. No further activity, it was quite still.
We moved into the cell where the Princess was held. It was so calm and still. Nothing during call out or on the k2.
Back in the Grand Hall We got a few powerful hits on the k2 when calling out to the monk. The lights didn't flash as normal, they stayed lit for a few minutes, up to orange, which is unusual.
No activity on the look out points above.
My guests were amazing. They got so involved and were calling out asking questions. Brilliant energy from them.

Lisa L Group
After taking part in the white light protection my group stayed in the main hall. We called out at first to see if we could get any interaction with spirit. Although we heard a few bangs and humming, this could of been noises from outside. Although we did feel that we were being watched from the balcony above. I picked that it was a monk and we thought we heard chanting. The guests wanted to go up to the balcony their was a different feel in that area. Chris was in the main hall with some of the guests and he heard a shuffling noise in the main hall. We then had a short break and collected some equipment. We took the spirit box, the teddy bear and the spooky doll. We then made our way to the top level of the castle. We got some interaction from the poppy girl, Lucy and Ella rose was picked up. The little girl was drawn to the teddy that went off a few times. We also picked up on a jailer not a very nice man who I felt was putting a stabbing pain in my stomach also one of the guests felt like she lost the use of her legs and almost felt drunk. We asked if that was the jailer making us feel that way and the spooky dolls K2 started going off right up to red. I then went off to do my live. After a break we went to the chapel there was an odd feeling down there and Chris was affected with a over coming feeling of anger. We were calling out and when one of the guests were doing some Scrying in the mirror and her face changed to a woman that looked like a witch, where she was punished for being a Witch. Her face also changed into a mans face. The music box kept going off along with the mirror which there was no explanation for. I got kicked while sitting on the stairs. We picked up on Dirty Harry and this was also confirmed on the SB7 we heard Chris and katie name come though, when we were asking who was in the room. We were getting full sentences on the SB7 but they were so hard to make out.
My group was really interactive and were all very much involved in the night. Great night had by all

Thank you to all who attended for giving such great energy through the night. We look forward to seeing you again soon. GO TEAM CASTLE KEEP