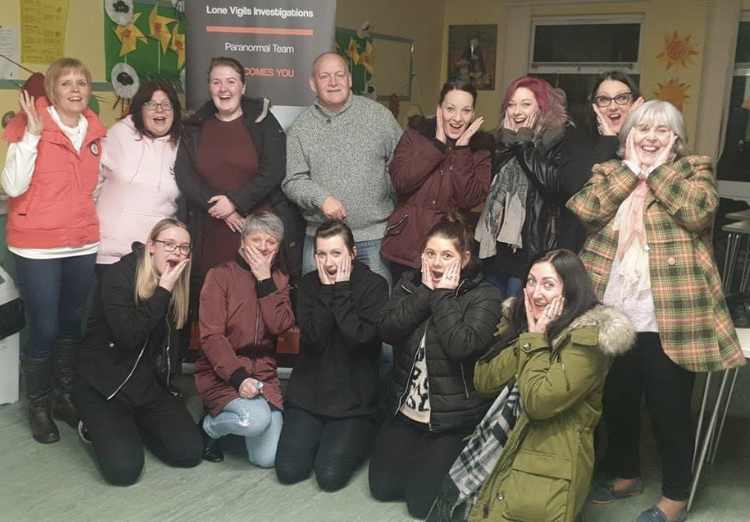 WOWSERS.......... Where do we begin? We entered this amazing location with not knowing what to expect with it not being investigated for a very long time and boy it didn't disappoint.

After doing our white light protection in the main hall, we headed straight into introducing ourselves to the spirits so we could make them at ease incase they weren't aware what was going on. We all sat down comfortable & started to ask out & guests immediately felt cold draughts by them. We were getting quite alot of verbal responses heard by guest's own ears from whispers to hearing someone sounding like a possibly cry. Due to the area being so verbal heard by all we introduced the portal spirit box to our session. We had a few names come through such as Michael along with a frederick & polly, the word GENERAL came through twice so a guest decided to introduce himself as he had served his time in the army. When asked if it was to do with fighting in the war, we had a reply FIGHT & 2 which then proceeded to the next question " are you ex military man " with an amazing response of YES and the name of the guest who was asking the question as though the spirit was replying to the question. This carried on with responses to questions being asked by the guest such as " where did you serve " & " your my brother " both questions were answered clearly with ENGLAND followed by YOU TO, WERE TALKING. This then led to a team member & guest thanking the spirit for serving in the war & a clear as day response came through YEH THATS RIGHT. As this was going on another guest was experiencing the smell & taste of antiseptic in her mouth which then led to another guest confirming that this part of the building was used as military hospital back in the war. 1 guest then proceeded to ask the question " can you show me something to prove your existence " and the portal box replied straight away clear as day WELL STICK AROUND. After a quiet period the question " where are you " & " where would you like us to go now " a response was heard on demand UPSTAIRS. Guest's then decided to split up with 1 group heading upstairs whilst the others headed into the ladies toilet & classroom at the far end of the building.

Nothing was reported in the classroom when guests then headed into the cellar & had a little activity on there REM POD. The group that had headed to the ladies toilets had K2 activity happening on response & also all guest's heard a little girls laughter with taps being answered on request. The group also received very cold breezes even though a guest sat next to the window said that there was no breezes coming from them.

Meanwhile the group that had headed upstairs responding to the spirit box command, as they headed along the corridor towards the stairs a member of this group was pushed by unseen hands as if to say hurry get upstairs. Once upstairs a lady picked up on a open vortex on about the 5th/6th step as they ascended the stairs. Once settled in the corridor again the lady in question picked up on a maid that had taken her life but not within the building, she was attached to the house due to the love of the building & she was possibly raped. A Male was also sensed trying to get into a loft hatch & possibly hiding. The portable SLS camera was showing a door actually open when the door is question was actually a locked door.

The groups then moved to different areas of the building with 1 of the groups in the back meeting room experiencing whistling which was on request, guest feeling a touching sensation on her leg, a tall gentleman figure seen between guest's which then moved into the corner of the room, feeling of burning sensation was felt on a guests back which was also experienced later on in the evening by another guests who sensed a possibly fire. A tall gentlemen was also picked up on again later on on the night with feelings of anger & resentfullness. This group also picked up on whistles later on with 2 names coming to them of BLACKY & EVELINE. Another group had headed to the ladies toilets to see what activity they could encounter which led to a torch being used by spirits energy, REM activity was being encountered along with a guest catching a red light anomalie on there phone when recording. They then proceeded using glass divination work(check out our live Facebook feed to see this) which led to great responses with many spirits coming through were they connected to a loved one, personal information & relatives.

Groups then again moved into different areas were the group of ladies from upstairs had moved into the tearoom, where they had some excellent reports of activity such as feeling of child like presence sat on a guests knee, 2 child's presences were felt with the possible names of Thomas & Angelina, a pen was knocked on the floor also when it had been placed on the table along with the chiming of the clock going off when it shouldn't of been. The other group was at this time had moved to the classroom with responses on our MEL meter going wild, along with a few taps in the room and a couple of figures seen on the static SLS camera which went as quickly as they had appeared. This group then met up with the ladies from the tea room and proceeded into room 3 which led to a group human pendulum. We had some brilliant responses ranging from emotions from team members & guests. An overwhelming feeling of upset which led to a guest leaving the room crying. During the pendulum, we connected to a gentleman who had a connection to the building which the group thought he had passed due to an accident which led to a guest having pain in her hips and believed he was in alot of discomfort due to this. We eventually ended the human pendulum session due to an transfiguration on a guest's face and overall and very very emotional feeling in this room.

All in all what a night this was, everyone hold your hands up and give yourselves a pat on the back for the amount of energy that you all give to the night. We are hoping to see you all again very soon.