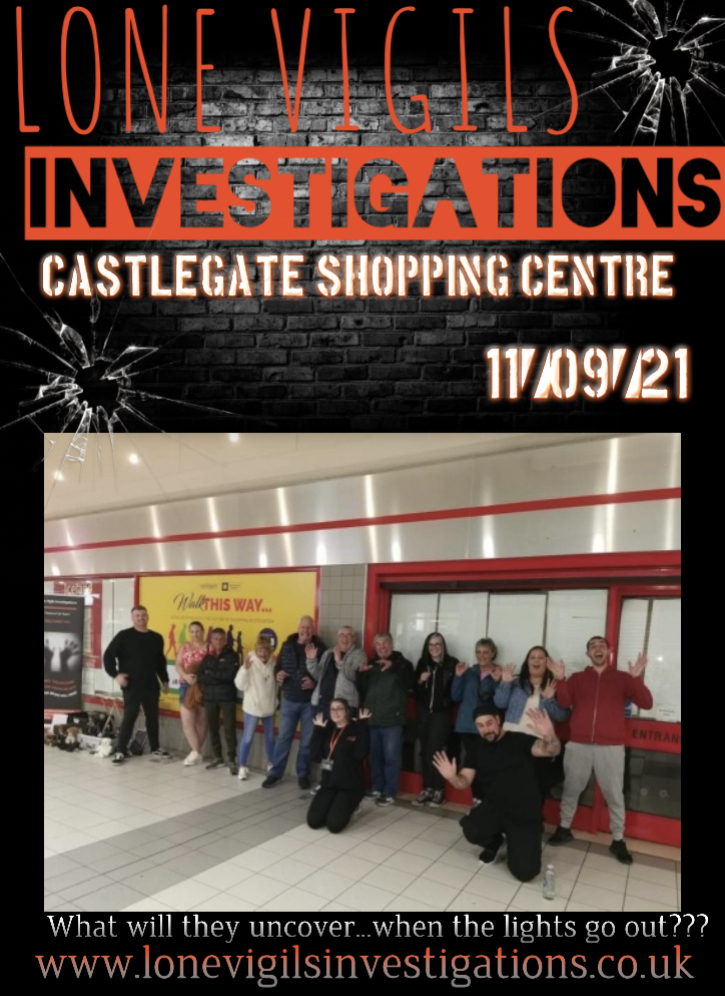 So after our introduction & white light protection our guest's headed off on our 4th investigation hear at Castlegate Shopping Centre.... We began a calling out to open up our senses & immediately we could hear unusual taps to responses to questions but couldn't rule out any reasonable reasons why these were happening..... A possible gentleman working on the shipyard was responding from inside a deserted shop that wasn't in use so we could rule out any fridges/electrical equipment from inside the shop as it was empty..... The taps seemed also to be getting closer & closer so much so it felt like it was right up against the shutter itself..... We then decided to head to the market hall all as one group still which we had heard a loud bang & went to investigate.... We began calling out & even brought our REM bear to help a possible girl child come forward but we had no responses from the bear but we did have a whistle back on response from when Chris asked spirit to do so... We cannot be 100% sure that it didn't come from outside & external noise but Chris ruled out an echo and the fact that it was so responsive within 2-5 seconds on the original whistle from Chris, it made us think this could of been spirit interacting with us..... Taps were heard down below us & a team member heard what sounded like a bang from one of the units as they were downstairs trying to find out where the noises were coming from... As this was happening, the lights all went out on the side wall as one of our trialists Mark called out but what was unusual, 1 of the lights stayed on which then turned off about 20 minutes later.... Chris asked the security guard later on in the night regarding this & told us that this shouldn't happen.... As we headed for a quick break to recharge our batteries we then decided to head to the depths of underneath the shopping centre itself..... We entered the dark & innocuous space, armed with our k2 doll, normal k2, music box & spirit box and immediately had spirit coming forward responding to both k2's we had within the group..... What we had noticed was the green light on the k2 was getting weaker & weaker and eventually went off which shouldn't of happened as new batteries had been placed in all of the teams equipment.... Was this the spirit we were communicating with, draining our battery in the k2??? After quickly replacing the battery immediately responses from both k2's happened as Chris returned from upstairs & the group made the assumption that the spirit maybe recognised Chris from the previous investigations he had done here as non other team member had been on previous investigations.... We sent a brave guest upstairs on his own & he returned a little while later saying he had heard what sounded like a cackle which immediately Chris thought it could of been potential spirit that they had contacted on the last investigation in the same area as they had been speaking to 3 witches & a cackle associates with witches generally... Could they be retuning to speak to the group?? The group then split up with Kathryn & trialists Robbie heading upstairs were the cackle had been heard by our brave guest doing a Lone Vigil and Chris remained in the dark store room with trialist Mark & the rest of the guest's.... We decided on using the spirit box to see if we could use the equipment for spirit to come through but we had nothing come through but the dolly k2 was responding to questions.... Maybe they didn't want us to hear there voices??? We then went back to asking out without the spirit box & what shocked us the most was that exactly the same had happened on a previous investigation in the exact same space..... We had something thrown which scared the living daylights out of guest's & especially Chris as he had witnessed the violent poltergeistal activity 1st hand last time.... Again k2 activity as we asked for the witches and we drew to our conclusions that maybe they didn't like us in there space due to poltergeistal activity happening with things being thrown..... Amazingly later in the call out session, we heard another object bering thrown which we found a grinder blade on the floor which we recreated the sound & found the exact same sound.... It began to worry us a little so once Kathryn's group had come back down we decided to respect the 3 potential witches who clearly were aggrivated by us & there responses on the dolly k2 & normal k2 being constant, we retreated for a break before we headed onto the last 45 minutes of the evening in the last dark area we had..... Opening the doors to the galley cafe, many guests were wowed by the old cafe they used to use.... Kathryn kept a group downstairs & Chris took a few guest's upstairs into the dark staff rooms. We stood in the dark & movement was definitely being heard and 2 guest's had felt a heavy feeling on there chests aswell as Chris having a Definite heavy head causing him a headache.... As this call out continued a gutteral groan was heard by all guest's coming from the corner of the room which made Chris hastily retreat to the other side of the room... More heavy impressions were felt by guest's but we were unable to get any response from spirit to there questions..... With this, we all realised it was gone 2am and headed back upstairs for our goodbye talk..... Would like a massive thankyou for our 2 trialists Mark & Robbie for all there energy & hard work given throughout the night & also our lovely guest's who made the night so enjoyable with there energy throughout the night..... Until the next chapter at our EXCLUSIVE Castlegate Shopping Centre..... Go team Castlegate Shopping Centre
lonevigilsinvestigations@gmail.com