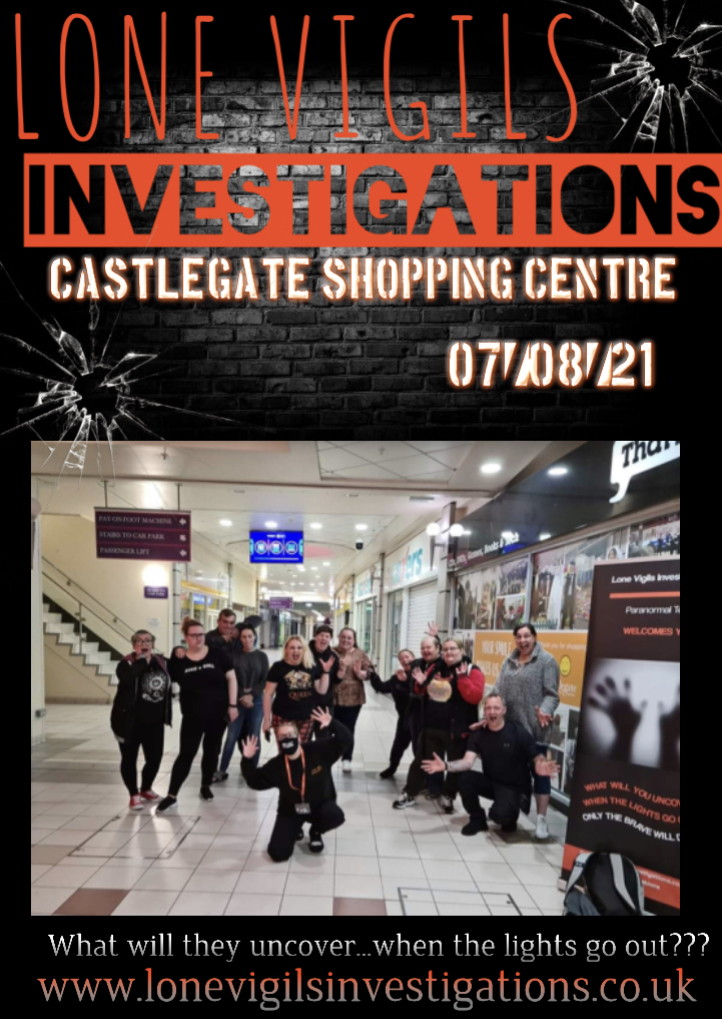 Castlegate - Cam and Chris
We started the night with a white light protection in the shopping centre. During this we all heard noises which sounded like knocking, we were waiting for a couple of guests who were late but Chris checked and there was no one around.
After the white light protection, we moved further into the mall and carried out a call out.
We could hear movement but didn't receive any responses to our questions.
We moved to an area where during our welcome talk, a few guests had seen a 'peeker', a shadow figure stepped out from the right, looked to see what we were doing and went back.
In this area our K2 was very responsive and we all heard what sounded like running and tapping on the sweet machines in the middle of the walk way.
We could hear movement from the market hall so we all moved upstairs. When everyone was upstairs, Cam and another guest went back to the area where the K2 was active and used the guests digital K2 to see if the activity was related to cables or the speakers. Our guest is an electrician and his K2 was also audible. We got nothing from his.
Upstairs in the market hall, Cam stood our K2 in the top of a cone, in the top right door area. We called out asking if there was a young girl, one of our guests was picking up on a child. Cam heard a noise and then noticed something on the floor next to the cone, it was 2 scratch cards scrunched together. Cam picked them up and dropped them and it was the sound she and others had heard. Not sure where they come from. No K2 activity but one of our guests captured a green light moving around, we thought it was maybe from the nightclub opposite but this couldn't have come from outside as there is a wall all the way round the outside which would have blocked it, also the lights from the nightclub changed colour every second.
We then went for a quick refreshment break.
After our break, we headed down to the deliveries area and went into one of the side rooms. We could hear a lot of movement and kept seeing a shadow figure at the far end.
Cam found a tennis ball placed it on a drain, jumping up and down on the drain and around it to make sure it didn't move easily. We went to total darkness and asked all guests to remain quiet and as still as possible. We were asking spirit to move the ball but instead something metallic was thrown at us. We found 2 bullets on the floor. We continued asking and another object was thrown at us, this time it was thrown with aggression, it was so loud and turned out to be a large stone/rock.
Worried about getting hit by objects, we tried to use the music box. We got nothing.
We tried to communicate via the sb7 spirit box, nothing direct but it was making some strange noises as if there was interference.
We tried the sb11 and we got the same. It was as if something was trying to communicate.
Chris found a spiral staircase so we headed there and started calling out. We heard dvp what sounded like a young girl. We were getting intelligent responses of various taps and bangs from the top of the staircase. Chris and one of our guests went to the top of the stairs and could hear noises from the other side of the door up there, which was the large room we investigated in June. A couple of guests began to feel unwell so we went for a short break.
We then headed to the galley cafe area.
We took the ouija board and rempod with us.
The first attempt of using the board was very quiet so Cam, Chris and 2 guests remained in a back room to big the energy whilst another group of guests in the next room were on the board. One of our guests felt something grab her arm and ran out of the room.
We started getting activity, not just on the board but from around us. We could hear footsteps (we were all sat down) and as if something metal had been dropped. We also heard loose floor tiles moved as if walked on but there was no one there.
On the ouija board, our guests were communicating with a young girl. We got the name Edith and also the year 1726.
The young girl made one of the guests sense a drowning, this was confirmed by the young girl. Also, her younger brother was drowned too. This despicable act had been carried out by their mother. The young girl was 8 and she told us her brother was 2 or 3 years old.
Chris had taken a few guests upstairs as we heard movement from up their when on the board.
We were sadly at the end of our night so had to close it down.
So much more to uncover from there. It was a great night.
Thank you to everyone for helping make the night what it was and we look forward to seeing you all again soon