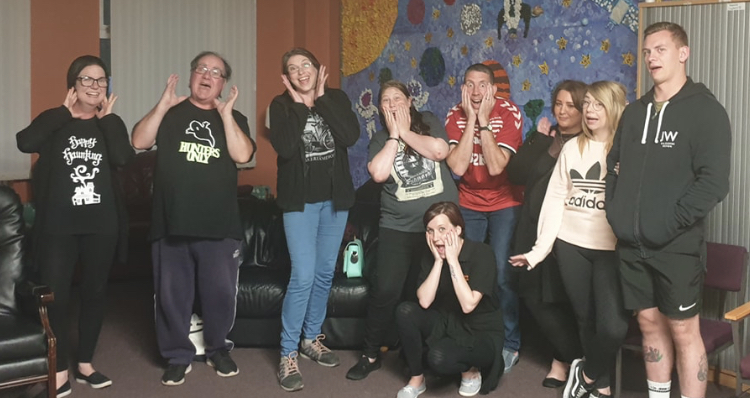 WOWSERS........We entered this amazing location for our second time for our EXCLUSIVE location and boy it didn't disappoint.

After doing our white light protection in the main hall, we headed straight into introducing ourselves to the spirits so we could make them at ease. We began with just the use of a K2 for our equipment as it's vital to use the best equipment out there....YOURSELF. We opened up our senses and listened to the noises of the building and environment. During this time, guests began to hear the odd sighs coming from various areas of the room. A couple of footsteps was felt by a guest walk behind her when everyone in the building were stood still.
The name Malcolm was picked up where the sense of him being connected to a ship or boat was felt by a guest, at this same time about 4 guests saw a small white figure appear. This then got everyones attention and the white figure soon disappeared. Whilst in the Gym, everyone began to notice a very strong smell which could only be described as a Hospital smell. Some guests then began to get a headache or have a sickly feeling which soon passed and the gym area became to feel very flat and we agreed to go elsewhere.

We spent a few hours investigating with very little happening so decided to go for a quick break to recharge our batteries. During the break, a guest came to a standstill as she felt the presence of a young girl by her side. This was then checked with the K2 it had very strong results. Guests continued asking questions where it was discovered that she wasn't connected to the building or land, but was connected to a guest during the evening.

Once we had refreshed, we headed down to the meeting room to see what could be uncovered. Some guests were drawn to the toilet area where using the portable SLS Camera, picked up on a figure which was able to copy demands on request.
During this time another group were in the meeting room, where the sense of a fire, with a male passing away due to this in his 50's was picked up. As the other guests came into join us, it was decided to try a human pendulum. This is where guests worked very hard to discover that they connected with a male, who was connected to the army and was linked to the land with ships before WW1. He had 2 children and had an illness that was the reason of his death due to being in hospital but was never treated. He was lost, looking for his loved ones but didnt want the help of anyone.

2 guests took part in some Skrying. A very strong male figure came forward and showed himself through our female taking part at the time. He looked like a very stern man, with thick black framed glasses. As this continued, a face showed what can only be described as a disfigurement. Could this have been the man who we connected with earlier who lost his life during a fire?
Our second guest, sat down to take part. During this time, a Korean or Chinese man came through, the guest taking part during this actually felt like he was being smirked at and saw the man's lips move as if he had said something to him. then he quickly vanished.

We decided to venture back to make use of the SLS Camera in the other areas. upon leaving the room we were all amazed by 2 wet footprints in the corridor. You could clearly see the whole foot including the toes. We looked at who had the smallest sized foot in the group (which was a size 3) and compared this. The wet print was half the size and was certainly a child. Where the 2 footprints came from, nobody can say for sure but only having 2 small footprints and no more along the corridor was brilliant and to see no water leak was about, we were all amazed. The picture can be found on our facebook page.

During walking through the Gym, a guest picked up on the name of Tom or Tommy and a few agreed there was a feeling about the area that hadn't been felt during the night in there. we tried to call out and upon this about 4 guests saw a curtain move to which was investigated and no open window or breeze was felt. The portable SLS camera picked upon a figure which looked like a child and we were all amazed when asked to shake the hand of a particular guest, saw the figure, bend over and shake the guests hand.

All in all, our night at Elmwood did not disappoint and although we had some very flat times during the investigation our amazing guests gave so much energy to gain some incredible evidence.