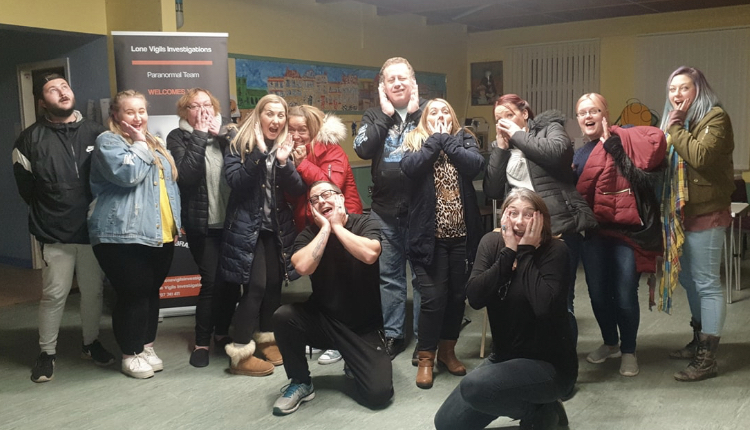 After our white light protection we began to open our senses and become familiar to the surroundings and noises of the building. Guests began to soon feel a presence of a spirit in the room. We had a few taps and bangs on response and a couple of guests saw a figure of a man where a couple of guests saw a girl who was described as wearing pigtails in her hair.
No activity was on the K2 but the temperature fluctuations were picked up in the room. Then everything felt calm and activity dried up.

We then decided to go to the hall where this was very quiet with no equipment or taps or noises however a guest felt the sensation of watched. Due to no activity guests then went to areas they felt were drawn too. Some guests were in the meeting room and felt a fire had once taken place along with the feeling of horses. They had a couple of noises in response. This was great to hear as on every Investigation this is something that always seems to come through for guests.
A few guests headed down to the cellar where on the SLS camera picked up a stick figure but soon vanished.
During the spirit box session, we had the name Thomas come through which is always a name on our Investigations here, the name Jason and Alice. We also had a good response of asking to tell us a name of someone in the room and it said twice the name of a guest but no other questions were answered.
In the tea room the SLS camera picked up a couple of figures which Didn’t seem to respond to questions that were asked and guests felt very calm and relaxed in this area.
Ouija board had no movement however k2 activity was very strong during the board being opened and responses seemed to be through the K2 so we agreed to close the board down and focus on the K2 responses. During this time a figure was caught on the SLS camera which did respond to questions asked. The k2 became very quiet and no activity was happening until a guest realised that our other K2 over the middle of the room was now actually responding.
Table tipping had no activity.
With a feeling of being watched, touched, hair pulled or voices heard through the night by guests it was a steady night with some good evidence found.
Elmwood didn’t disappoint and although at times became flat, guests gave it their all with energy to gain excellent evidence which has also been found on previous investigations.
GO TEAM ELMWOOD