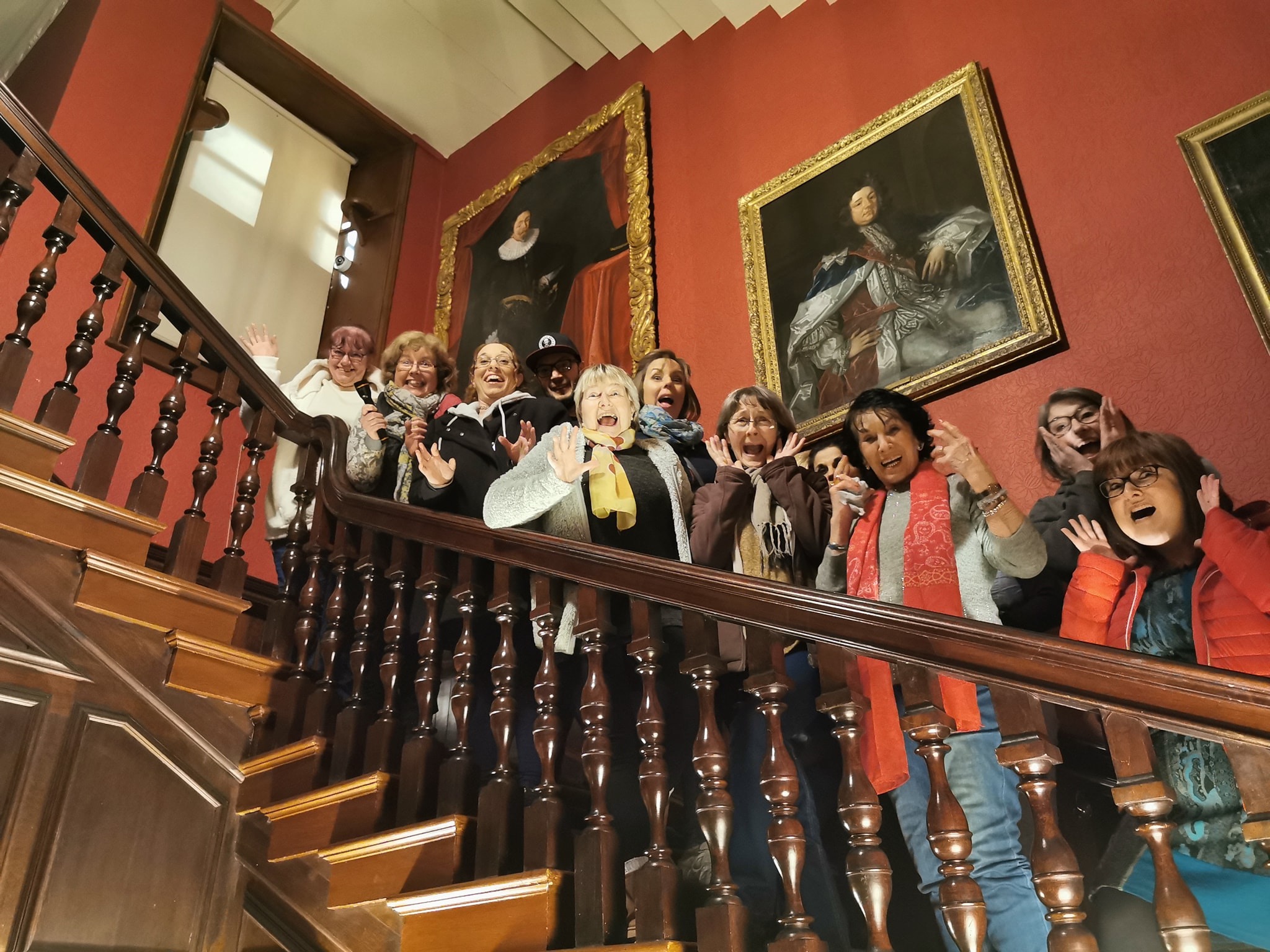 We started with white light but before guest's arrived Chris had been doing a live walk around for members at home & heard what sounded like an children's scream/whining noise which we think has picked up on the live protection in the 3rd floor long Hall, a shadow man was witnessed moving across the corridor. We experienced k2 activity which moved to another k2 machine on request. Guest reported hearing taps and feeling an "energy"moving around them, whistle or wheeze from the far the end of the room, one guest reported that an energy was holding on to her hand and this caused her right side to go freezing to the touch she reported that the spirit followed her through out the night, taps behind one guest that physically made her jump away
In the Library a shadow man was standing in front of people, it was reported that a guest had their neck touched. We heard the rattle ball move and also the settee moved. Guest and live feed reported hearing groans and sighs with the names Richard, Parker and Michael coming through. Again a guest reported a feeling of being touched at the same time as a light was seen by her. lights seen on live feed which were in 2 different light forms 1 a clear creamy flash the other a whisp of light form which floated across the screen coming from the guest in question whilst a guest was using the dowsing rods with the device actually displaying a funny blue colour around the guest at the time which was verified by a team member
We went into the Dining room where people were complaining of feeling sick, this is the room in which the beheading block is located and which later on in the session a loud noise came from & used the k2 meter next to it which began to flash to Amber when placed next to it. We used the spirit box and the voice of a man and a women came through, however they gave answers in French.The Ouija board was used with the name janet coming through this was a personal message for a guest. A guest on the live feed picked up on a woman and child repisratory issues, this was to be highlighted later on in the night via the human pendulum and also the same member on the live thought he heard the name Vincent come through to which we asked the portal spirit box & clear as day twice the name Vincent was heard.
Went out to main road at midnight, this is following the reports of residual haunting of a man carrying headless woman, however he didn't appear in front of us tonight.
After a cup of tea we made our way up to the middle floor bedroom. We used the Melmeter and quickly got strange activity with the rem pod and temperature fluctuations after asking the spirit of Sarah to come in to the room. Footsteps were heard in the maids corridor and K2 activity occurred at the same time. We started the human pendum and the spirit of a boy aged 5-10 who died of respiratory illness came through(which is what a member earlier on the live had picked up on) , he reported he was the son of a staff member and he enjoyed visiting other children in the house. possible noises were heard on response to when asking the child questions in the adjoining room so sent a brave guest in alone to see if he could get activity in with him but once the brave guest entered the room no activity was heard. He said there were no nastiness in the house and that he loved being there. what was rather interesting was in the adjacent room was pictures & painting of many children, could 1of these pictures or painting been the boy child who we had just been speaking to in the room.
We had success with table tipping in mess room with an energy rocking the table but it's energy didn't last.
Heading up to the Playroom with the ouija board and the energy was calm nothing occurred in this room for us and whilst this was going on 1 team member who was doing the live & collecting the equipment up from the floor below decided to do a quick call out in the dark foreboding corridor & soon left in a state of fear when asked out for noises to be made & the picture frame next to him made a noise followed by the opposite picture frame next to him making a noise then followed by movement behind him which made him make a hastily retreat back upstairs to the comfort of being back with the group. All in all an fantastic night at a amazing location with some great activity being captured & great energy throughout the participants & some exclusive news coming to LVI & there fantastic members regards a return to Kiplin Hall