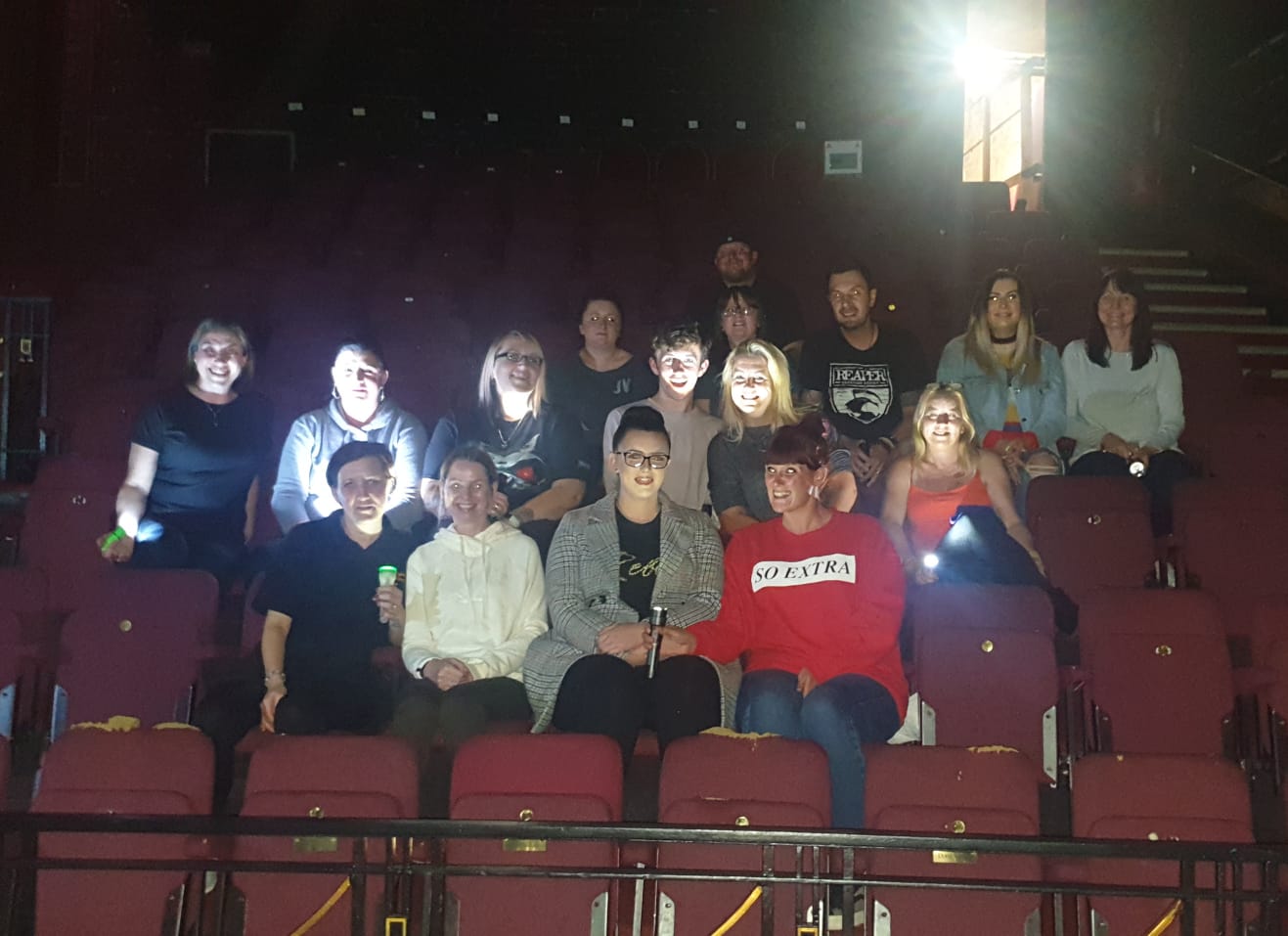 So with our 2nd visit to investigate the Majestic Theatre Darlington we began with our white light protection with all guest's taking part on the stage area. We began listening to the buildings noises and environment and guests were quick to notice noises towards the middle stairway. This was quickly ruled out as being paranormal due to our first visit, our debunking lead us to find a leak of water dripping that was causing the noises. This was once again the same situation and was quickly debunked.
Our K2 was on the stage area and had constant, strong spikes. This was then placed on a chair in the middle of the stage and stopped spiking so was ruled out as some kind of electrics from under the stage area.
Guests began to spread out as some were being drawn to particular areas within the room. Upon a guest going to the top level and sitting on the step where she was drawn too, she quickly began to feel sick and moved to the chair where the sickly feeling came to a stop. Movement was heard and seen by all, and it wasnt long before we were all concentrating on this one particular area. We all continued to call out but the area quickly became very flat and we all decided to move on.

Guest then split off to venture to areas they felt drawn too.

After a break to refresh our energy, we headed up to the abandoned area of the Theatre, to which we had some amazing K2 activity and a shadow was seen breaking the lights of our lazer grid pen. Guests then asked for something to be thrown and on response the other side of the wall, we clearly heard a very loud bang as if something had been thrown. This had happened from an area of the building we had no access to. Also a metal noise was heard to have dropped and under investigating, no reason of this could be found. The afterlife box was used and we had the names, Chris, Clare, Claire and Karl which was actually the name of the team members during the night.

We were then told we needed to go to the stairs to call out as someone was feeling drawn to this area, so we headed off where we came in contact with a spirit what was communicating with us in a French dialogue. The communication was hard for us all due to the communication barrier but we did have answers on response to our questions.

The curator of the night caught up with us to ask if we were using somekind of high powered electrical equipment due to static interference in the speaker directly behind him whilst he was in the office alone. He mentioned the first and last time this had happened was due to a staff member using a high powered electrical equipment so this is why he asked. We can confirm all our equipment was battery powered.

All in all, it was a quiet night for our equipment with many guests being affected physically and emotionally. We bedded down for the night whilst some guests continued into the early hours of the morning but to not much responses.

All in all, a brilliant night with some good evidence. Thank you to all for bringing so much energy throughout the night. We look forward to seeing you all again soon.