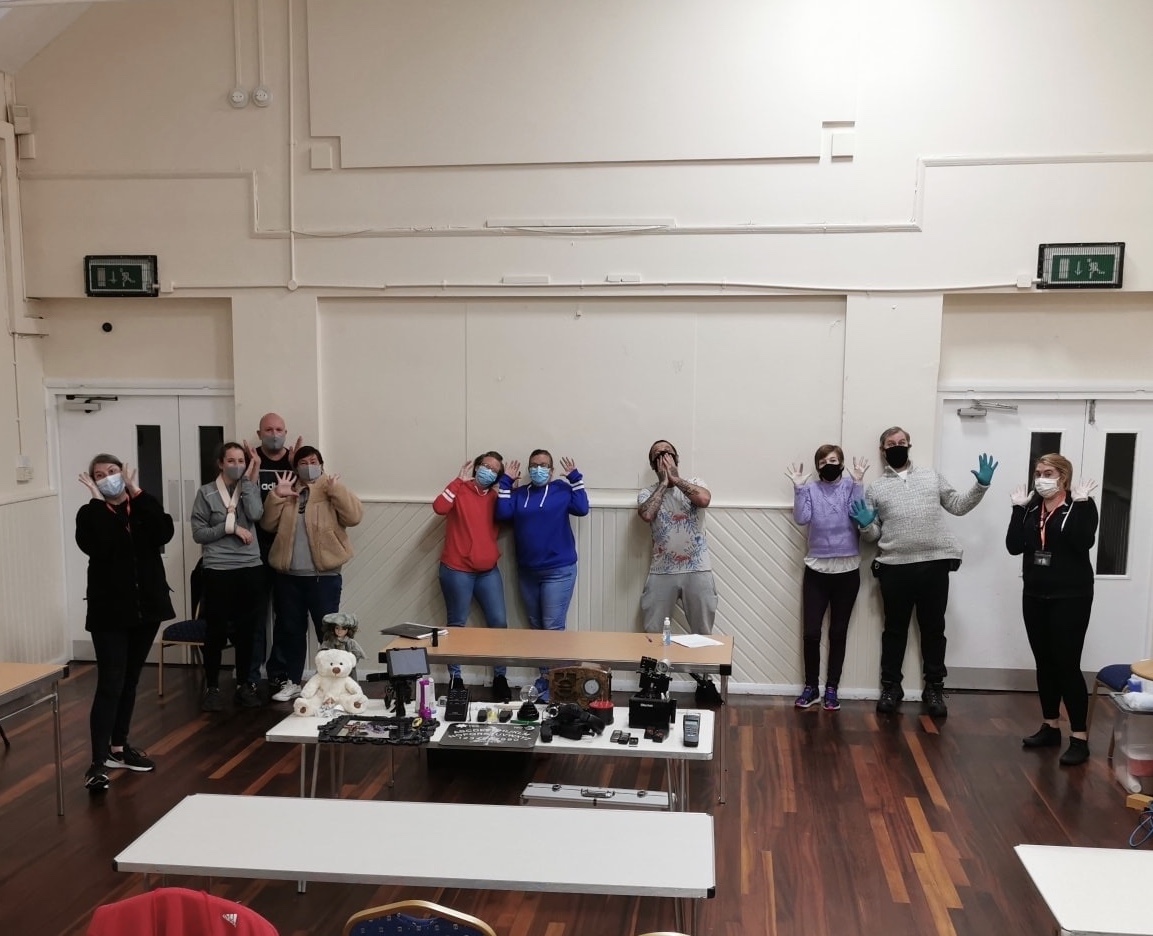 So it finally came & after 3 months of being locked down, LVI with much change due to covid-19 guidelines we were back investigating. We started as we always do with our white light protection & during this we heard tapping coming from the back of the room. We then began the investigation with a our eager investigators & began as we do with no equipment & opening up our senses. Bangs on response, possible voices heard which were checked for outside & a PIR sensor on the wall activating when no one was moving were all activity having taken place whilst calling out. Guest's were also getting cold feelings around there legs which the guest in question was picking up on a dog & also a military connection was picked up by our staff member Claire. We then all moved into the corridor taking our k2 meters with us which had no responses in the previous room aswell as the laser grid pen, REM pod which was placed at the top of the stairs & our sb11 spirit box. We all began to call out & movement was heard down one end of the corridor which sounded like metallic sound in which a team member went & checked outside to see if it was external noises & came back that it wasn't. A guest up on the landing stairs then began to get a pain in his shoulders which had him in quite some discomfort & also a photo was taken by another guest at the same time which looks like a shadow picked up on it. Could this of been the spirit placing the feelings of his pain onto one of our guest's shoulders?? The name josef & maisie was picked up on & who was a small boy that reside here. Also some kind of laugh was heard when 2 of our guest's came out of the toilet area. Plenty of movement was being heard & our Dolly k2 began to respond to our questions which confirmed military connections & also the little boy josef we had picked up earlier on. We then took a quick break & ventured into the out buildings which then brought some amazing activity. 2 guest took advantage of being able to have a little Lone time with 1 guest staying on the stairs were we had been investigating before & wanted to see if he could pick up on the feeling he felt earlier on which affected his shoulder but he had no responses on his app on his phone whilst another brave guest spent time in room 1 all alone but when returning to the group he reported it being very calm & quiet. Whilst the 2 brave guest's were doing Lone Vigils in different parts of the building, the room we had entered as the group was a hot bed of activity. The ouija board was brought out & guests in there own social bubble were allowed to take part & began getting responses from josef, he was 13 & had a little brother with him which was later reported by a watcher on our live feed on Facebook that he was called Phillip & only 10 years old. The energy began to drop on the board & josef was leaving the board with the afterlife ITC box in the background began to produce some amazing responses. The name josef came through, a name from group was heard when asked the spirit to name someone in the group & also a guest's mum came through to help the spirits of the building. What really blew our mind & this was seen on the live feed on Facebook was 1of our guest's being physical pushed off her chair when we asked the spirit to take a seat. Taps & bangs were heard in the room next door when we asked out & also the name of the building came through on the afterlife ITC box aswell as the exact number of guests in the room when we asked the spirit to tell us how many living people were in the room, this blew our minds & thankfully the guest who had been pushed was not hurt. With time flying by & coming to the end of the night we ventured to another part of the building which we hadn't been in & again the activity didn't disappoint. As soon as we sat down, a rush of what only can describe as a strong gust of wind rushed by a member of staff & guest. This caused quite a response from our team member & put the heebie jeebies up her. We had a watcher on the live feed saying they had seen a face & movement in the window behind guest's & also a tug of staff's hair & a feeling of something dropped on him was produced by spirit of the building. We then were astounded as a sound was heard which sounded like something dropping on the floor, a guest had found a stone on the floor, was this poltergeistal activity & spirit trying to gain our attention?? Temperature fluctuations were felt around guest's again & constant movement along with very strange noises coming through our sb11 spirit box which had never been heard before. With the time flying by it had hit 2am & it was time for home. We would like to thank all our attendees who produced plenty of energy throughout the night & also sticked to our strict covid-19 guidelines throughout the night so we thankyou all for making the night what it was. We look forward to seeing you all again soon.