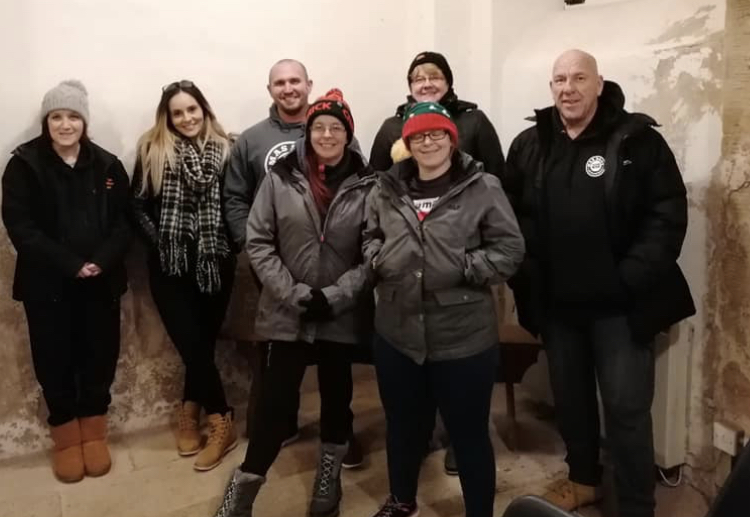 Team Jedburgh
We started the night in the Upper block of the women's prison choosing to do white light protection in a cell. As we stood acclimatising to the dark and increasing our senses, it appeared that 2 of the guests were swaying however they insisted they weren't. We heard clicks in different areas of the room and as the energy built the room became increasingly darker. A corner of the room caused guests to feel cold and woozy and the energy of the room was odd. I jumped and screamed when I saw a very tall shadow man stood beside me, much to the amusement of guests.
We were joined by the other half of the group in the main corridor of this wing, one guest sensed a small child and occasional footsteps could be heard in the stairwell. We heard a growl/groan coming from the cell we had just left hence 1 brave guest was shut in there by himself, he reported to hearing breathing near him whilst in there!
Moving downstairs we again heard the clicks in a small cupboard. A brave guest held a lone vigil with David for company, the clicks continued and were unexplainable. Using a digital thermometer we asked for the room temperature to be raised from 5.5c to 6.8c, which it was, it then returned to the original temp. (I should have asked for a warmer room temperature) Flashing lights, shadows on the walls and voices were heard.
A quick break to warm up, then we headed to the notorious male cell block. Its known for being active and is locked away from the general public.
On the ground floor guests witnessed flashing lights and temperature drops and one guest saw a shadow stood in a cell. we made our way upstairs the vibe changed with inky dark blackness and a feeling of uneasiness. Everyone held their own lone vigil and had a cell each. We all heard footsteps and shadow of the old prison officer still walking the corridor was heard. Stones were thrown into cells but sadly nothing interacted with the equipment.
We held a ouija board session in the male wing, with a guest getting a personal message from a family member but nothing came through from the prisoners or staff.
It was a cold night as we settled down on the stone floor of the women's wing. As we were all tucked up, I heard bangs and slamming doors from above us but everyone was accounted for, residual or not I stayed in bed