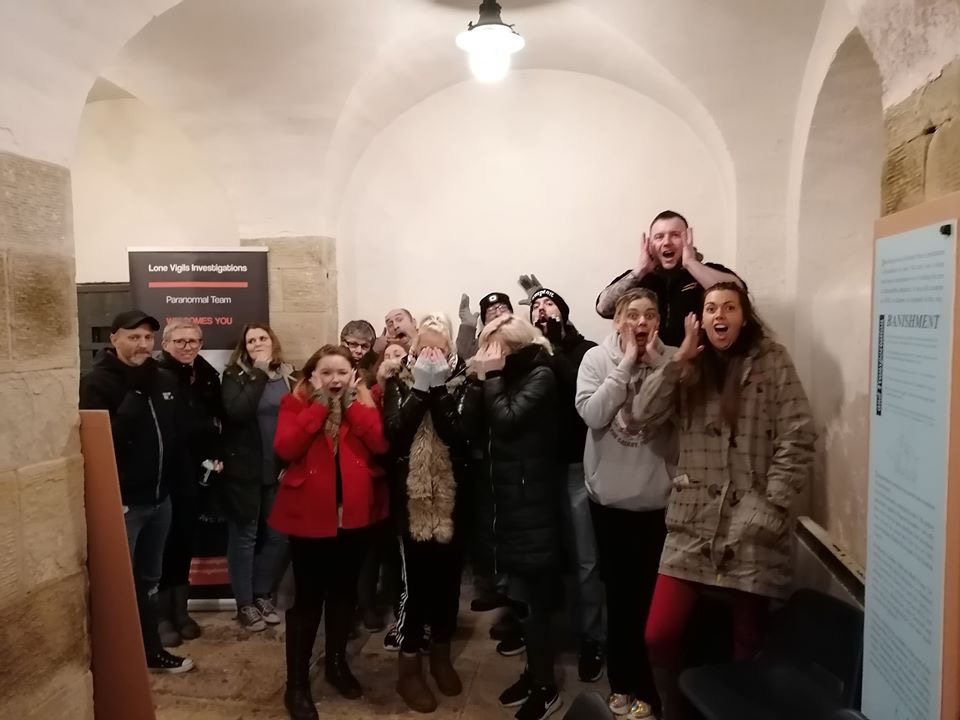 So last night after battling through flooded roads and torrential downpours, we arrived safely at Jedburgh Jail.
Cam started the night off with the lone vigil in the men's wing as voted for by you lovely fans.
Claire and David took the guests to the women's Wing.
Cam started the lone vigil sat downstairs in the men's wing on a chair, in the middle of the corridor. A call out was done, a few shuffling noises and taps could be heard. She then proceeded up the stairs to the worst part of the men's wing.
Once upstairs, cam setup the Sb7 spirit box and placed the rempod halfway down the corridor.
Cam done a call out and again a few noises were heard. Nothing came through on the Sb7 but the rempod did go off twice.
Checkout the video of the live feed on our page.
Whilst Cam was completing her lone vigil, David and Claire began the night with guests taking part in the white light protection and opening their senses as they went to the women's wing. We completed our white light protection and settled into some calling out. Quickly guests started to report a child holding their hand. Over the course of the night this happened to 3 women, one lady picked up on the name Nicolas.
Shadows were seen moving around the cells and guests reported feeling cold drafts around their legs, as though a child was moving between us.
We had people feeling nauseous so decided to split the group with some people going downstairs. Again a child was picked up, this time a female child who had difficulty in walking.
The child was able to manipulate the environmental temperature around the woman's hand as evidenced by the temperature gun going to requested temperatures.
The men's wing brought about feelings of general uneasiness, but no equipment was affected (unlike Cams experience of the rempod!), we held a ouija board session in a cell and made contact with an energy who took a dislike to David. But again the spirit was unable to affect any equipment.
Some of the group stayed behind on the ouija with Claire, we made contact with a man who gave full name and year of birth (1416) he told us he was 23 when he died. He was fearful of what awaited him should he cross over, he wanted help. Claire made a white light for him and he saw his father figure, we asked him to move the planchett to goodbye when he crossed over and as soon as we said that the planchett moved to goodbye. It was a lovely experience in the men's wing (there's a first).
As we settled to bed several others kept on ghost stalking, they reported that they had fantastic experiences in the women's wing. Again in the dead of the night guests reported to hearing bangs and crashes as they tried to sleep, is it the echos of the past still playing or spirits attempting to gain someone's attention. I think next sleepover needs someone to stay all night up there!!!

Thank you to all who attended for such great energy throughout a cold night. We look forward to seeing you all again soon.