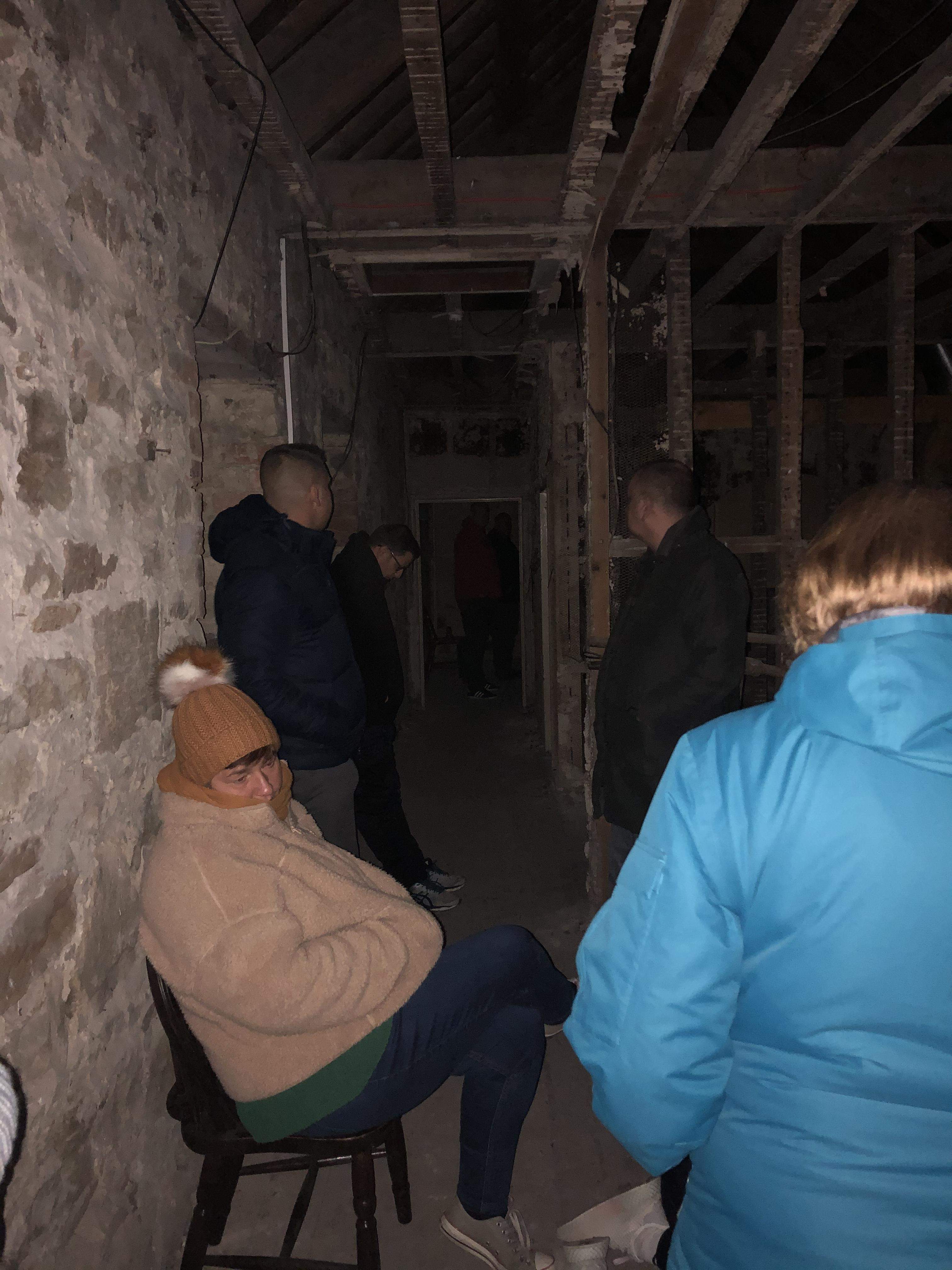 We began the night with a walk around to familiarise guests with the building and areas along with any hazards the castle came with. During this it wasn’t long before we found ourselves in the abandoned part to begin our white light protection and open up our senses. With a feeling of being watched and a male spirit being picked up on. A guest felt drawn to a particular area and went and stood to where she was drawn. This soon followed by a large dragging noise followed by the sound of heavy boots walking around us all which happened in response of hearing the spirits footsteps. A guest asked for something to be thrown and we were again amazed and shocked to hear the sound of something hitting the floor hard as if it had been thrown. Was this a spirit responding or was it simply coincidental of something dropping from the ceiling? Movement was heard on the stairs followed by movement downstairs which led to a guest heading down alone. Although nothing much happened downstairs he was able to confirm he could hear movement. Shadows were seen and the room became even darker.
Taps, bangs, shuffling, footsteps and objects dropping in this area were what we all experienced and with so much happening all at once it soon became flat and the room became lighter and we decided to move to another area. 3 guests stayed on here and had some REM activity as well as hearing a door shut where they thought someone was joining them but were taken aback when nobody was there.
As the other group were heading to find another area they were drawn too, they were amazed to hear the sound of footsteps up ahead in the room that lie empty and decided to call out. Although it seemed quiet 2 guests jumped up as the vase next to them had moved by unseen hands.
It wasn’t long before we ventured upstairs into the other abandoned area of the castle where once again we found ourselves stood in a room with a couple of objects being thrown. Shuffling noises and the spirit of a lady was picked up on. We tried a spirit box session but had no responses through. During table tipping activity we had amazing response with this where the table seemed to be drawn to a guest who wasn’t taking part where the table followed her around the area. Whatever had come through certainly had a lot of energy.
In the room adjacent to this stood a team members and a guest who at this time were experiencing the sound of a lady’s voice along with movement and feeling as if they were not alone. The table activity was absolutely outstanding and it soon came to a stop and things began to settle down.
An Ouija board session was decided to try in the first area we started in. As the board was being opened up by the team member a guest informed everyone that the SLS Camera had picked up a figure stood ontop of the board. The SLS Camera battery soon drained. The board started off quietly as the energy built and soon we had a spirit called J who was 2. It wasn’t long before we realised this wasn’t the case and the spirit began to spell out the name of the team member who challenged the spirit that only positive energy was allowed through the board. To the guests on the board they felt it wasn’t making sense however the team member watching knew it was actually answering to the guest who was calling out further away in the room. With certain actions happening on the board it was clear it wasn’t a positive spirit and the board was closed down quickly.
The area remained quiet and we all moved on ready to start looking at bedding down for the night as we all felt tired and drained.
Kielder Castle was a brilliant night with some great energy from our guests. Thank you to all for your hard work and look forward to seeing you all again soon