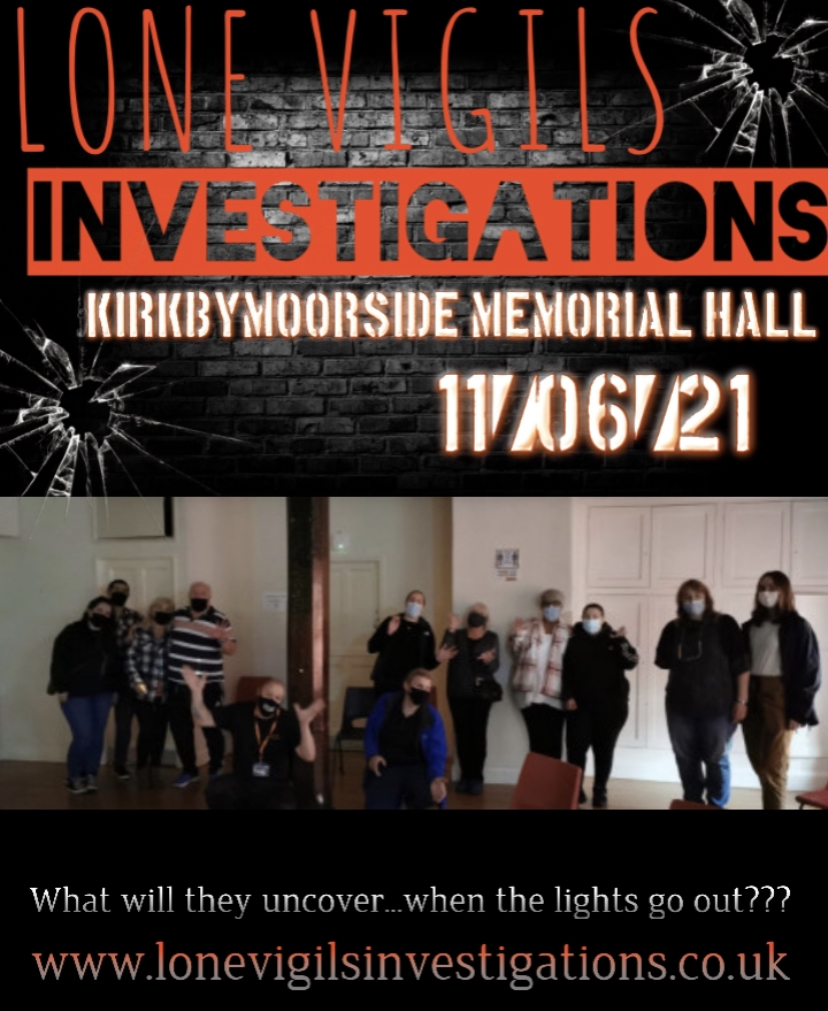 So after our white protection within the group up in the main hall, we began as ever with a call out session that helped our guest's open up there senses which always helps with the evening's activity... As the guest's got themselves comfortable around the hall a guest started to get a feeling of a tightening of there chest whuch didn't feel threatening just maybe an impression of how spirit felt... Guest's then started to hear knocks & also the curtains began to move on response gently... Some guests then retreated to the balcony area & sat down as the call out continued. This guest then began to get the feeling in her chest again as as they called out the chair in front which was a Theatre style chair banged in front which upon checking by a member of the team, it had moved forward. Lights where being seen aswell as shadows as questions were being asked & the name Henry was picked up.... As the name Henry was continued to be called out, activity down in the corner of the hall where the small stairs lead down to the green room intensified where guest's were hearing shuffling & banging as if there was movement on the stairs.... We then proceeded to split into our groups of 6 which complied with our covid restrictions as the area was a little smaller in the green room. Kathryn took her group down and Chris kept his group upstairs as a little boy had been picked up by a participatntt on our live feed so we decided to bring up REM bear which helped the little boy come forward.... The lady then asked out as it was felt that the little boy needed her reassurance and she began to feel her hair being played with gently and as this was happening an orb shot across our live feed... Was this the little boy coming forward & confirming his presence.... We then decided to break to recharge our batteries as the energy had dropped a little.... After a little natter & a return to refreshments for our guest's our energy returned as we headed down to the "Hoppit" which was once used to house criminals awaiting trials in the court.... Equipment was then introduced to guest's & our SLS camera & music box was placed in the different areas for guests to hear & see.... As we asked out noises were heard on response & a brave guest decided to brave a Lone Vigil inside the dark & cobweb ridden "Hoppit" as the group asked out, the lady began to feel as if she wasn't alone as shuffling on the floor was being heard as if there was a presence in there with her. The lady in question then asked one of her group to come into the "Hoppit" and again movement was heard & along with the music box going off with astounded our guest's in the other room.... We then proceeded to use the ouija board in one of our bubbles which included the lady & gentleman which had experienced so much inside the dark "Hoppit" and as we asked out the planchette began to slightly move. Witches were being picked up on our live feed by participants at home and as we asked out the planchette shot over to yes, which astounded the guest's on the board & the guest's watching... Some other guest's also braved it inside the "Hoppit" and a gentleman made his self known to 2 other guests with movement & shuffling his feet as if to tell them that he was close.... As the group came closer to the end of the evening & the last half hour upon us we all headed back upstairs to the main hall & began calling out & straight away the area that brought us so much activity earlier, it began again with footsteps heard, banging of the door which when we checked we noticed that when we left the area earlier, the door had been left open. Had this door been closed by unsuspecting hands whilst we had been down in the Hoppit?? Constant footsteps & shuffling as well as the door banging were being heard by all as we kept calling out & also a shadow figure had been seen rushing around the corner of the stairs & then a loud bang proceeded which astounded all guest's & made one guest leave the area hastily. Unfortunately this activity came at the wrong time as we had to end the event as it was approaching 2am but maybe the spirits of the building had began to trust us enough & didn't want us to leave.... All in all a brilliant evening investigating Kirkbymoorside Memorial Hall for the very first time & all guest's had amazing energy in calling out & making the night a memorable one... Big thankyou to all attendees & we look forward to definitely returning here as spirit definitely did not want us to leave with the activity right at the end of the evening....

we started the evening in the hall, we did the white light protection to keep us grounded for the night.
we started off in a large socially distanced group to build up the energy, as we were getting activity from the stairwell at the back of the hall, i took a smaller group down and into the little storage room at the bottom.
we called out, we got bangs, knocks and creeks on the stairs while one of the guests brave left sitting there alone.
we heard footsteps comming down and then a presence so much that the guest had to quickly run down the stairs and into the room with the rest of the group.
after a short break we headed down into the basement/ old holding cells area, the smell of stale air hits you like a brick wall when you go into the area.
we took a lot of equipment with us including the sls camera which picked up some lights and dots but no figures.
we called out while guests took it in turns in small groups to go into the hoppit area.
some guests also used this opportunity to conduct a ouji board, when the planchette went straight to “goodbye”.
the whole time we were down there we got the feeling of being watched from the shadows of what now is the kitchen area of the basement.
we had another short break and headed back up into the main hall of the building.
the energy felt as if it had been building up and we got there alittle bit too late as we were approaching the end of our time in the building.
thanks to everyone for a great night, ans can’t wait to go back and investigate it in the future!!