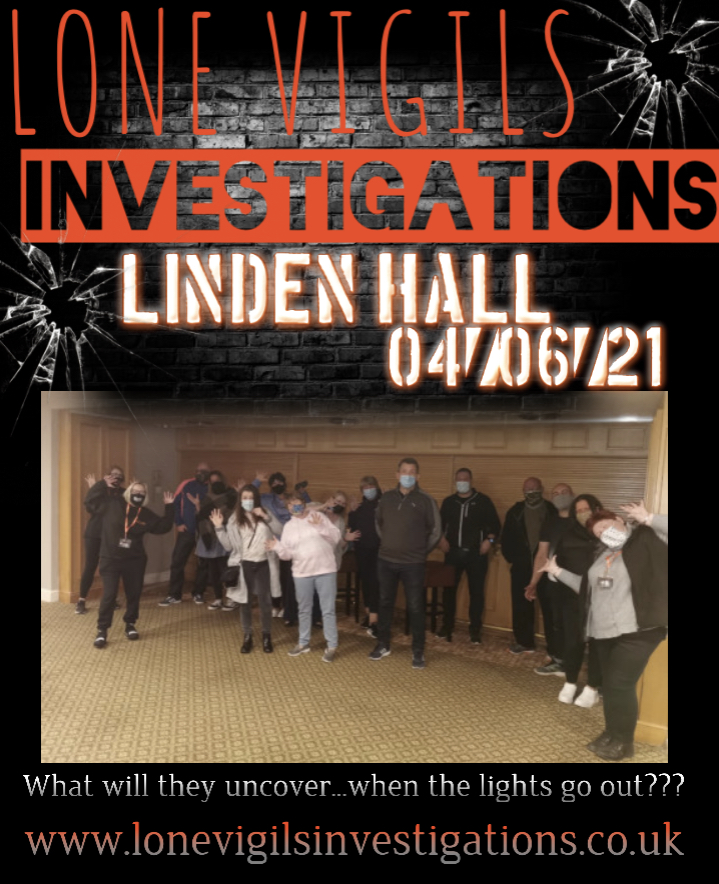 Chris’s group
So after setting up & getting ready for our guest's, we were really looking forward to seeing what we could uncover as we had had such good activity whilst setting up which included hearing a little girl laugh, a sash being thrown on the floor along with beads being scattered across the floor so with this in mind we were really excited to get the night going.... So after doing our white light protection with the guest's taking part we all took our positions in the main banqueting Hall, all socially distanced of course & began a group call out & activity started to begin. K2 activity on response, flashing lights seen by guest's & staff alike along with a guest actually seeing a little girl in the windows reflection sat down in a chair..... Could this of been the little girl who we had heard laughing earlier in the evening?? The name Emily had been picked up for her along with also a gentleman standing in the background who wasn't coming forward just stood watching us. A guest had picked up on the name George potentially for him. We carried on calling out to Emily & George & we then heard footsteps above us in the smaller banqueting Hall which astounded us when a member of the team went & checked and there was no one there at all.... Who could this of been??? As the group were calling out in the banqueting Hall, Kathryn was doing her live Lone Vigil in the basement area which used to be a morgue. This can be watched back as its on our page..... As the activity started to subside we headed up stairs to the smaller banqueting halls & did some calling out but only little bits & bobs were happening with potentially soldiers being picked up on but nothing was 100% confirmed by any equipment or responses..... We then all had a quick break to recharge our batteries & then split into our groups of 6 as the areas in the hotel were now available to use... Cam's group headed to the morgue basement area and Chris & Kathryn headed to the restaurant area.... We all got comfortable in the restaurant & began calling out and 1 guest picked up on cigar smoke smell and when this was pointed out the k2 began to spike. No names were confirmed for this gentleman but we believed him to be the man of the house. A few spikes on the REM pod were picked up when questions were asked but all in all this area seemed very very quiet & we all had a retreat downstairs to the morgue area where cam's group then headed to the back stairwell of the banqueting halls as cam had picked up earlier on when setting up, it felt a little heavy ...... So Kathryn & Chris's group headed down into the basement where once a morgue was once housed & again seemed very quiet. We tried an ouija board with 2 guests in a bubble but nothing came through though there was slight movement on the planchette.... We did a call out session but nothing major came forward & introduced itself though a few taps were heard but weren't 100%sure if this was anything paranormal..... So after a quiet time in the morgue area, Chris & Kathryn group of 6 then headed back up to cam's group & back into the main banqueting Hall were the bulk of our activity for the evening seemed to be based but again the energy had drained and only seemed to be minimal activity. The one thing we did notice though that Chris had put the beads that had been scattered across the floor earlier by the little girl, all in a pile & this pile of beads had been disrupted whilst we had been away in other areas.... Was this the little girl again wanting us to know she was there??? All in all, the evening started really well but as the night went on the activity seemed to dwindle & like we always say, you can have some quiet nights & we can't guarantee activity but is there spirits in this grand Hall?? I would say so yes & would love to come back to Linden Hall & see if spirit would be more forecoming with us.... Keep your eyes peeled for a 2022 date

Cam’s group
I took my group to the basement area after we had recharged our batteries. We were very excited following Kathryn's Facebook live activity. We went in armed with a ouija board and the sb7 spirit box.
We had to limit the board use to our guests bubbles. The 1st 2 guests jumped on the board and we tried to build the energy. Sadly we got no activity.
The next couple tried the board but again nothing.
We tried to do a call out using the sb7 but again nothing came through.
I opened the door and placed a rempod in the doorway and attempted to encourage any spirits of the building to come and join us. The rempod didn't go off.
We changed location and moved to the small stairwell at the back of the kitchen. I found it uncomfortable earlier in the night.
We spaced out up the stairs and sat listening whilst calling out. The rempod did go off 3 times when we were talking about a young girl who was possibly a maid, but that was all we got.
We went back to the main room where we had started the night. We got a few noises and one of the doors appeared to be moving, as if opening when there was no breeze.
The other team joined us and we continued our call out.

Thank you to all who attended for bringing your energy…we look forward to seeing you in the future. GO TEAM LINDEN HALL