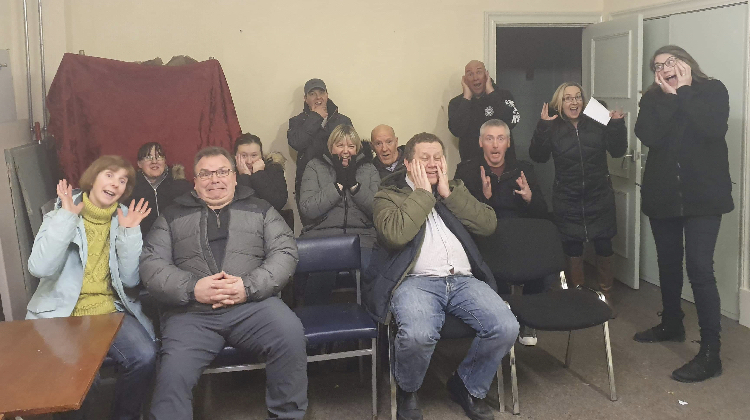 We started the night in the main hall and carried out a white light protection for our guests. A few of the guests asked if they could not participate in this part and remained quiet until we completed it.
We stayed in the main hall and carried out a call out. We placed the rempod on the stage, with a picture of the miners, the band and 2 pieces of coal. As soon as we mentioned the pictures and coal, the rempod illuminated and stayed on for a short while.
A couple of guests then went onto the balcony area and a few on/behind the stage.
We continued with the call out and got a few taps, footsteps (we were all still) and dragging noises from what sounded like the changing rooms.
After about 45mins we went into the bar area and experienced the lift going off. David tried to debunk it but it never went off again until requested over an hour later. It's a strange one.
We decided to grab a cuppa and snacks to recharge our batteries.
Following the break, a few of the guests carried on investigating behind the stage and the rest of us went into the room just off the corridor.
We used the Sb7 spirit box, laser grid and K2 meter in this room. We added a teddybear and 2 toy cars as we were communicating with a small child.
We also carried out a ouija board session in this room but the child preferred to communicate via the K2 and even had us singing.
Unfortunately the gym was locked so we headed back up to the main hall and split the group into 2 groups. We had one group table tipping behind the stage and the other on the stage. There was no action on the table behind the stage but we did hear a few taps. The group on the stage had the other table moving quite a bit, to the point where it tipped over completely.
We used the laser grid in this room and it worked brilliantly, until spirit drained the batteries 3 times.
With 20mins to go we headed up to the balcony area and carried out a call out.
All in all it was a quiet night as Mainsforth goes. Here's hoping our visit in July is more active.
Thank you for all our guests for making the night an enjoyable one and we look forward to seeing you again soon.
GO TEAM MAINSFORTH