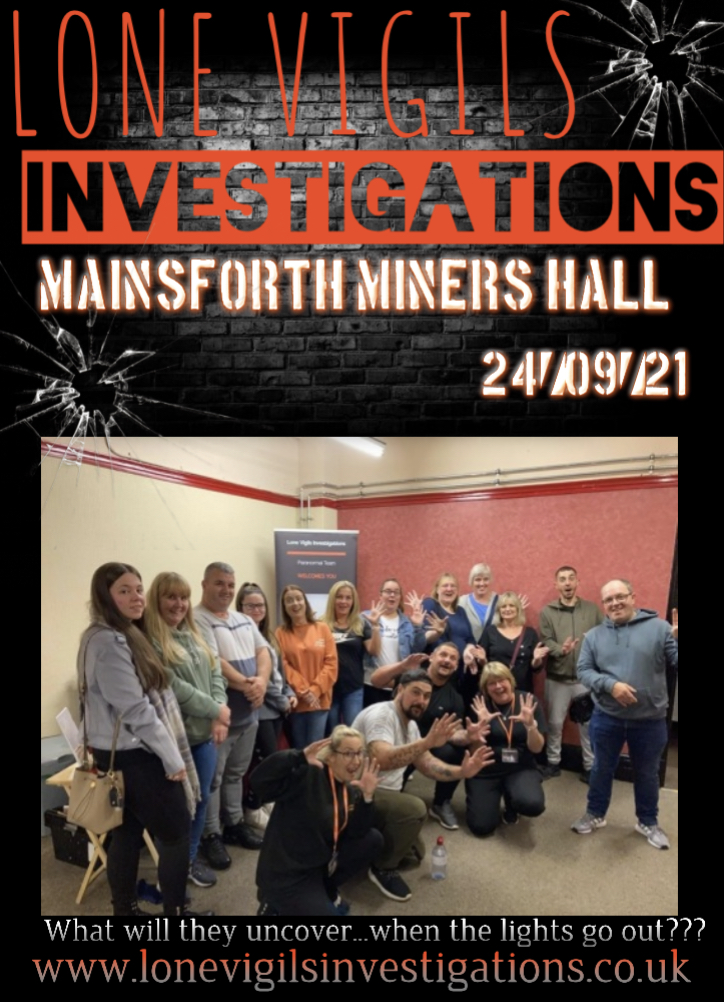 We started our night in the main hall where everyone participated in the white light protection, which was read by Tonia.
After this we done a call out. A number of guests could see movement up on the balcony.
We went up onto the balcony and continued calling out. We could hear faint noises from knocks to shuffling from the lower level.
One of our guests, Robbie took some photos and a white mist appeared in 3 separate places on 3 photos which on one of them, was the location on the stage where we could see the ribbon on the stage curtain, black out as if someone was walking by
Another guest shrieked as her thumb was grabbed. At around the same time Stephen and his wife Angela felt static electricity.
I took half of the guests onto the stage so that we could see the balcony and those on the balcony could see us. Further calling out was done and then we went for a break.
After our break, we went into the music room next door to our base.
We put a K2 meter on the table and the sb7 on another table. We asked questions but were hearing loud noises from near the door. We turned the sb7 off and placed the cat ball and toy car on the floor and setup the laser grid.
When asking if a young boy wanted to play with the toy car, the laser grid dimmed to almost off. This happened twice.
We were then hearing furniture being dragged from upstairs, we thought it was the other half of the team on the stage but they then joined us and told us they had been sat in the bar very still.
We all remained in the music room and were asking spirit to communicate with us using one of Tyries devices. This was really good. We established we were talking to a soldier.
We could hear movement coming from upstairs again but every guest and team member was in the music room.
We turned all devices off and sat on silence listening to the noise above.
We moved upstairs to the bar area, armed with a K2 on the bar, one on the table, Tyrie device on the floor and the motion sensor bear on the table.
The motion sensor bear illuminated and our K2 was going off. We then starting getting results from Tyries device again. The soldier had returned. We asked for the lift to go off. It hadn't gone off once all night.
The lift eventually went off and Robbie nearly died. I've never seen a bloke scream and run so fast. We all laughed and so did spirit.
Tyrie placed his rempod on the top of the stairs at the stage door. It would go off when we were in the bar but if we stood at the bar door where we could see the rempod it stopped immediately.
We had another quick break to recharge, I think a few guests had got a fright.
With less than an hour left we went back to the main hall with the ouija board and a table.
Stephen also brought the spirit speaker up.
There was no activity on the board, the name George came through on the spirit speaker and there was slight movement on the table.
As the table seemed more active, I closed the board down as there was too much going on all at once.
Half of the guests went to the foyer area downstairs with a rempod and sb7 and the others stayed table tipping in the main room.
Those in the foyer placed the rempod near the lift and the sb7 at the doorway. One of the guests, Dan, stood near the lift while the others asked questions.
The lift moved and Dan made a strange noise of fright and legged it out of there. So funny.
We ended the night and Ged gave our end of night talk to the guests.
What a great night. Mainsforth lived up to its activity
Thank you to all our guests for helping make the night such a good one  We look forward to seeing you all again
lonevigilsinvestigations@gmail.com