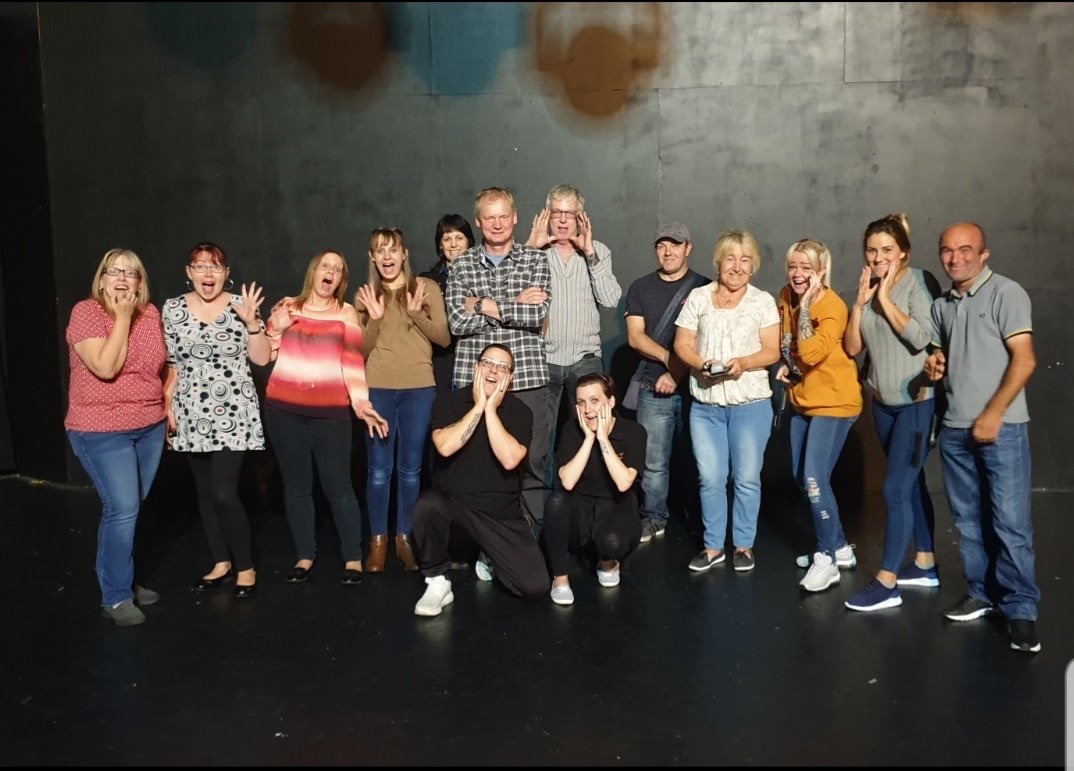 So with our 1st visit to investigate to the Majestic Theatre Darlington upon us and doing our white light protection with all guest's taking part on the stage area, We then started a call out session so we could all heighten our senses. There was a little K2 activity with the K2 sitting in the middle of the stage area also a loud tap heard by all to which we could only describe as metally noise. Guest's then began to space around the auditorium sitting down on the chairs where one guest then felt a presence up in the top left of the auditorium. We began to hear noises up in that area but our debunking found it to be a possible dripping coming from the roof to which 1 guests actually feeling a drip on her. A few guests also heard what sounded like whispering coming from the stage area. We all then felt the feeling in the auditorium has quitened down from when we had started so all guests then started to wander off for there Lone Vigils.

As we began to wander off into our different area's, one guest mentioned to a team member that he was picking up on a female spirit with the name Jennifer and that she was a usherette in the 1940's, we are still to confirm this but we are still trying to find any details of this. A team member then took 4 guests up into the abandoned rooms behind the stalls where instantly a sceptic of the group felt very uncomfortable and mentioned it felt a completely different energy in this part of the building. They began to get responsive K2 activity to which we found to be a gentleman, one guest then feeling very uncomfortable asked the question "would you like me to leave" to which the response was yes & immediately she took herself out the room as she had felt she wasnt wanted in the room when she first stepped into the dark abandoned room. During this time the sceptic of the group along with another guest witnessed a very small ball of white light travel from one end of the room to the other upon further investigation there no light pollution from the exterior or interior of the building to explain this. Once this group had left and another group of guests had heard about the feeling from one of them, they ventured up into this part of the building to where K2 activity was being witnessed aswell as to which we were all astonished when we were told about this, a piece of wood was flung hitting a door on one side of the room. Whilst this was going on the 3 remaining guests had stuck to the top part of the auditorium to which a lot of unexplained noises where being heard along with cold draughts being felt on there arms.

The groups then headed back to there preffered locations after a quick break, dotted around the building where the group that had witnessed the block of wood being thrown headed back to this room where glass divination took place and some stories started to unfold. This spirit they found out had raped his sister and had a very turbulent upbringing with his parents and was scared to be around them. The name bob & Catherine had been picked up on and that this gentlemen was a protectionist during the war and the reason they reside here in this part of the building is because this is were his despicable deed had been done. They also picked up through the glass work that the same fate happened to the spirit in question, his daughter & wife. The other guests during this time had ventured to the dark dressing rooms to the side of the stage where table tipping session took place. They came across a very gentle lady spirit who was from a performing family, she was a only child and was forced into acting to which she carried on in her adult life, but this didn't bring her happiness. They also had came across that she had lost a child before birth and became very secretive with little responsive answer given when asked about being married. During this time the MEL meter had been introduced & the REM built into this device which had been stationed in this whole location for some time had not been disturbed, all of a sudden began to trigger off. The guest's then moved the table into this area where the MEL was situated but had no response to there question although the responses seemed to becoming from the REM built in the MEL meter. It became clear that the lady was struggling to come through as there was another spirit stopping her from coming through. Another team member had then joined them with a few other guests and introduced our new AFTERLIFE box to which straight away the name RACHEL came through and the word PREGANT was heard clear by all the guest's. We began all asking questions and then possible put the 2 spirits that we had contacted in different areas to be linked together and the word ACCUSATIONS came through the afterlife box clear as day with everyone hearing this. As 1 of the guest's had been doing a EVP in this changing room at the time and we began to listen back to this we all heard clear as day when he asked "what is your name" a response is there to which we all played back and listened to and agreed the response was JOE/JO. We will try to get the guest to download this onto our page for you.

Due to our new AFTERLIFE box bringing some great responses heard by all guest's we then decided to take this to the abandoned rooms behind the auditorium and began a session in there with all guest's taking part asking questions. One of the guests again had to leave like she had earlier as she didn't like the uneasy feeling of the room and whilst she was out of the room we were all told to GET OUT which all guest's heard with there own ears. Also a woman's voice was clearly heard to which we all agreed upon that it sounded like I NEED YOUR HELP. We also had responses on the speaker including SLOWLY DIED with also the names MOLLY & BARBARA coming through, one of these names actually popped up later on in the night when doing an ouija board session.

After another quick break we headed into the entrance hall to the theatre to were a human pendulum took place. We came across a male that worked in the theatre, he died by an accident outside the building to which one guest got the urge to ask the question " did you get struck by lightning " to which a firm answer of yes was felt by the guest taking part in the middle of the human pendulum. We also picked up on the name SARAH to which was his sister. We then all decided that this spirit was actually beginning to play games with us all with the answers not making much sense so then ended our human pendulum session.

All guests then headed back into the changing rooms to take part in a ouija board session as we felt the changing rooms had a strong sense of feeling int there. Once the session started we came across a spirit that couldn't spell and when asked how old they were, went to the number 2. We attributed to not being able to spell due to its age. We then proceeded to ask the spirit to step away and let another spirit come forward to which we gained a response with the name MOLLY being spelt out and her age was 26. We were all in awe of this name being spelt out as we had heard this on our AFTERLIFE box in our previous activity She worked in the theatre with family and actually died in the theatre due to unnatural causes which we could not find out from the spirit due to having to close the board down due to our 3am finish finally approaching us all. We also heard during this ouija board session footsteps from outside to which when a team member then checked if anyone was out in the stairwell corridor to which he did find a guest but he was adamant and confirmed he had only just come through the doors to find us all.

As we began our goodbye talk to our guests we were interrupted with a loud bang in the auditorium to which some guest's likened this to a tambareen fallen from a height, to where we then proceeded all of us to check this out including our curator for the night Matty and found absolutely nothing had fallen onto the stage and couldnt account from where this noise had come through. When we spoke to Matty afterwards he told us that the noise was that loud he actually someone was in the theatre itself hence his reaction to check but was a astounded to find nothing.

All in all a fantastic night and a big massive thankyou to all our guest's who attended and made the night such a great night with great energy throughout and also a thankyou to Matty for being our curator for the long evening. We look forward to returning in August for our EXCLUSIVE SLEEPOVER event here.