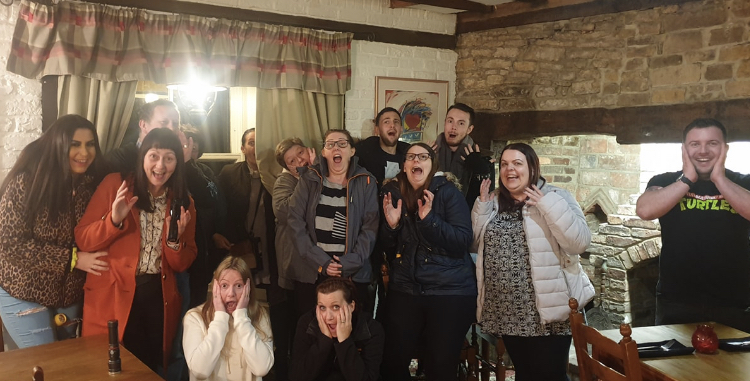 We began with the white light protection in the panel room before heading upstairs to open our senses. We all began in room 8 where the name Elizabeth was soon picked up by a guest. She felt this was of a little girl but was scared by another spirit. On calling out we had a few taps and bangs on response along with a few guests seeing a dark shadow in the room. The name Henry was then picked up on and felt this was a bad man. Many guests began to feel a heavy feeling in the room and it soon drew darker and guests suffered a tight chest feeling to which moved out of the room.
4 ladies stayed in the room and a sense of a fire was picked up. They continued to have temperature fluctuations as well as a few taps on request. During use of the spirit box the name Henry came through who confirmed he was stood behind a guest who at this time felt unseen hands around her neck. He also said that the fire wasn’t his fault.
A floral smell was then picked up and a lady spoke and asked for help followed by murder. The name Abigail came through. Then the room soon became to feel flat.
Guests were in room 3 had come across the name of a girl called Alice who passed away aged 11. A priest also made himself known called Albert. 2 guests at the same time felt like they had unseen hands around both their necks and the spirit was asked to step away and at this time 1 guest felt pushed forward head down into the bed face first.
Temperature fluctuations were also felt during this time. The K2 became responsive and turned out that Alice had been abused by Albert. She was in an orphanage and he was supposed to protect her but abused his position. When asked if Albert was with them they had response in the K2 but this soon stopped. Another guest also had experienced being pushed back into the wardrobe by unseen hands then no further activity took place in this room.
In room 6 there were strange smells, taps on response which then responded to confirm it was them. Spirit box had the name of one of the guests who was told to go in the shower. The afterlife box also responded with Middlesbrough when asked what town they were from. Guests felt that Henry was responding to the questions
Movement was heard from the shelf with a guest feeling like she had been touched as she was stood near the shelf’s. The sensation of seeing the door move was also seen by a number of guests also.
Downstairs in the bar area, guests participated in a human pendulum where we came into contact with a male spirit. At this same time the Rempod lights began to spike strongly. Guests then asked various questions and came to the conclusion they had contacted Henry who was trying to protect Abigail. We soon removed the guest in the middle due to her feeling very uneasy. The SLS camera picked up a few figures in various places through the night with some good responses back from it.
Shadows, sensations, equipment affected, guests being touched, pushed, watched and voices heard. A fantastic night that didn’t disappoint with guests working well to produce great energy to gain excellent evidence. This place has so much more to uncover.
GO TEAM MANOR HOUSE FERRYHILL