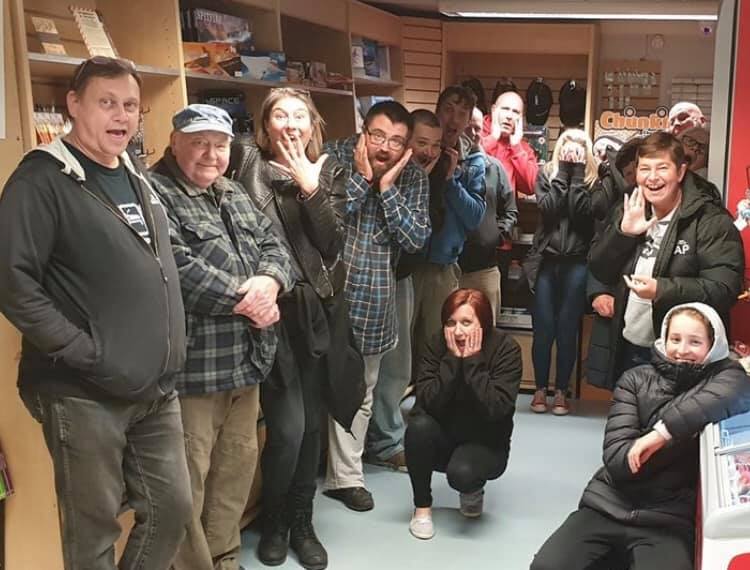 We started in the main hanger with our white light protection, which then followed onto us all opening our senses within the group. We all spread out around the hanger where some guests felt drops in temperature along with a sense of being watched. Guests began to group as they became drawn to a particular area of the hanger which lead to movement from the questions being asked, a couple of guests saw a figure move towards them.

During our time in the main hanger, a compass had been placed in a display cabinet where responses to the compass was seen in response to questions asked. The spirit later confirmed himself a Sgt Shaw who lost his life in an Aircraft accident. This lead to questions being asked around Sgt Shaw who had our full attention. The one thing during this time that really shook up our senses was a loud bang which sounded like something heavy hitting an aircraft, to which nobody could explain and it was confirmed by Keith that they often have activity of a spirit who does throw items about. This also fitted in with the fact of it often happening when communication is made with Sgt Shaw and is believed the spirit who likes to throw items was the spirit who killed Sgt Shaw in the aircraft accident and does this when communication is focused around Sgt Shaw.
Figures were picked up on the SLS Camera with responsive movement to questions asked.
A member of the group joined the area we were gathered and as we were discussing moving to another area, the guest in questions name was heard very clear by all members as a whisper. This then lead the guest to brave the main hanger alone. As we all left him alone, a clear dragging movement was heard in the corner of the hanger, which when investigated we couldnt find where or what this could have been.

During our time in the tram hanger, clear voices were heard, along with a child voice often heard. Movement and figures were seen along with a guest becoming emotional for no reason.
We proceeded to the helicopter hanger where a brave guest entered the cockpit area, he soon had to remove himself as he felt a strong head pain approach him. Guests sat in the helicopter heard a few taps and bangs, felt as if they were being watched and the spirit box picked up a German accent but had no response that made any sense to questions asked. Some guests were stood around the helicopter and heard shuffling around them and also a metal on metal noise.
A live feed picked up a strange buzzing noise which watchers at home also confirmed along with movement of footsteps and shuffling.

In the vehicle hanger, 3 guests experienced movement along with a shadow figure seen. During this time they had the spirit box and asked the spirit to tell them the name of the location they were at and amazingly had the response of NELSAM!

In hangers 1, a very strange feeling of discomfort was felt by many guests.One guest was alone in this hanger to begin with and heard a clear conversation between 2 voices, upon investigating nobody was in or around the hanger. He then came and told a member of the team who went to investigate with him due to being a little shook up and they both witnessed 2 bright flashes of light at the same time along with movement between the vehicles. He was then left alone to continue his Lone Vigil, he didnt last too long after hearing a loud dropping noise along with the feeling of unease and quickly came to find the rest of the group.

We ended the night back in the main hanger where we proceeded with table/glass work and had a strong connection with possibly a spirit who was playing games with us and not being truthful.
All in all a fantastic night with some amazing evidence that everyone experienced. Thank you to all that attended and for your amazing energy throughout the night.