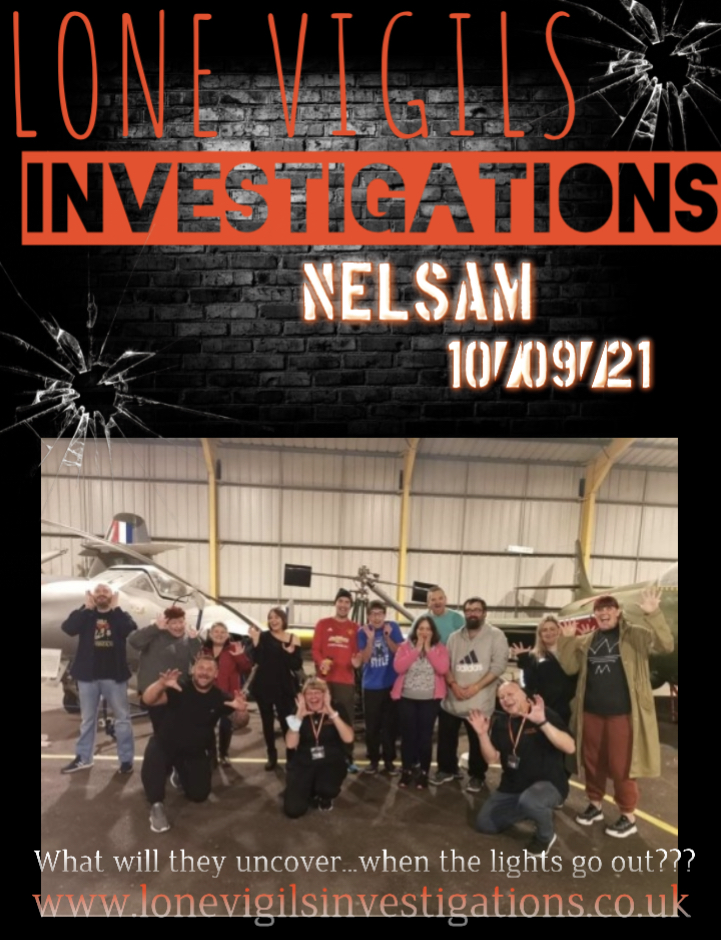 The night started with a welcome talk and white light protection both lead by Chris. We started as a whole team in the main hanger to hopefully build the energy up. A lot of light taps could be heard but it was hard to distinguish if this was the metal building contracting or a response to our questions. A lot of light flashes (not so much anomalies) we’re seen in the top section of the hanger. I seen it first but said nothing until one of the guests said the same thing. One guest in particular felt a strong presence in that area and spent the whole investigation in that one area calling out & trying to interact but to no avail. After our break, we split into 2 groups…. Alan & Steven took their guests to the opposite hanger with the American military vehicles whilst myself & Chris took our group into the tram hanger. Although overall quiet in the trams (no K2 or Rempod activity) we did have interaction with 1 spirit (well Chris did)! We were crouched down trying to communicate with the 3 children known to roam the hanger when Chris was touched in the crotch area… a lot of laughter followed with one guest in particular in fits of joyful laughter…. One of the museums team members did suggest this could be “Vivienne” the Transvestite … which resulted in more hysterical laughter… Taps and noises were heard in response to any questioning but on the whole pretty quiet.
We moved to the American military hanger and although the atmosphere was peaceful we all stood touching the main helicopter to see if we got a reaction. Myself, Chris and some of the guests felt as if the tail of the helicopter was moving. I felt it was more a rocking motion and I wondered if it was ever brought down over sea (hence the rocking motion). The guests tried a bit of table topping but again, nothing came of it. The last hanger was very calm and gave us nothing so we all headed back to main hanger to join up the other group to finish the night. It seemed Sam from Alan & Steven’s group was having a more personal connection with spirits and was feeling uncomfortable following a session on the Ouija boards.

Alan went with two of the guests to the far end of the main hanger. Michelle mentioned that she thought she was being followed by a small child and it was with her everywhere she went. We did a quick experiment with a K2 to and started asking questions to see if we can get a response. The K2 did respond and the main message was that this was a young three-year-old child and it was happy being with Michelle. Michelle mentioned that her clothes had been tugged a few times. When the group split, Alan and Stephen took one group and started in the first hangar with the military helicopters. One of the guests Was drawn to the Wesland helicopter. She had her hands on the helicopter and when asked what she felt, explained that she was picking up on a beautiful energy and that the people associated with the helicopter had done some great deeds. She also felt a tingling on her face. The group did not pick up a lot of activity in this hanger and we spent time calling out and asking for signs of activity. The group then moved to the second hangar that housed a selection of military motor vehicles and armoured trucks. Quite a few members of the group said that they felt uneasy in this hanger so we conducted a K2 session to try and engage the spirits. A few small taps were heard but again there was little activity. Stephen encouraged the group to reveal any feelings or intuitions they were having so that we could target specific questions. One guest felt very uneasy when at the back of the hangar, next to the armoured vehicles. She didn’t want to remain in that area, so moved more toward the from area.

The group moved into the tram hanger and various devices were used to try and engage any spirits in that room. We use the motion sensor teddy bear and a K2 child’s doll and spread out. There were a few taps potentially in response to questions asked and a small group went with Alan to try and communicate with reported child spirits. This did not bring much activity apart from a few small noises close by.

Back in the main aeroplane hangar as one large group was conducting a question and response session using a compass on a mobile phone, Alan took three of the guests who want to do a Ouija board session next to one of the aircraft. A guest called Sam had been drawn to this aircraft earlier in the evening where she had repeatedly felt quite emotional. Alan opened the Ouija board session and Sam and her friend proceeded to ask out for spirits. They got an immediate response and the planchette indicated there was a spirit communicating. It became apparent fairly quickly that both guests and Alan were an very uneasy with the speed the planchette moved and the content of the messages coming through. It was quickly decided to end the session. The board was then safely closed down.

The night ended so quickly and although overall it was quieter than normal, all guests expressed their gratitude for a fab night.
Go Team NELSAM