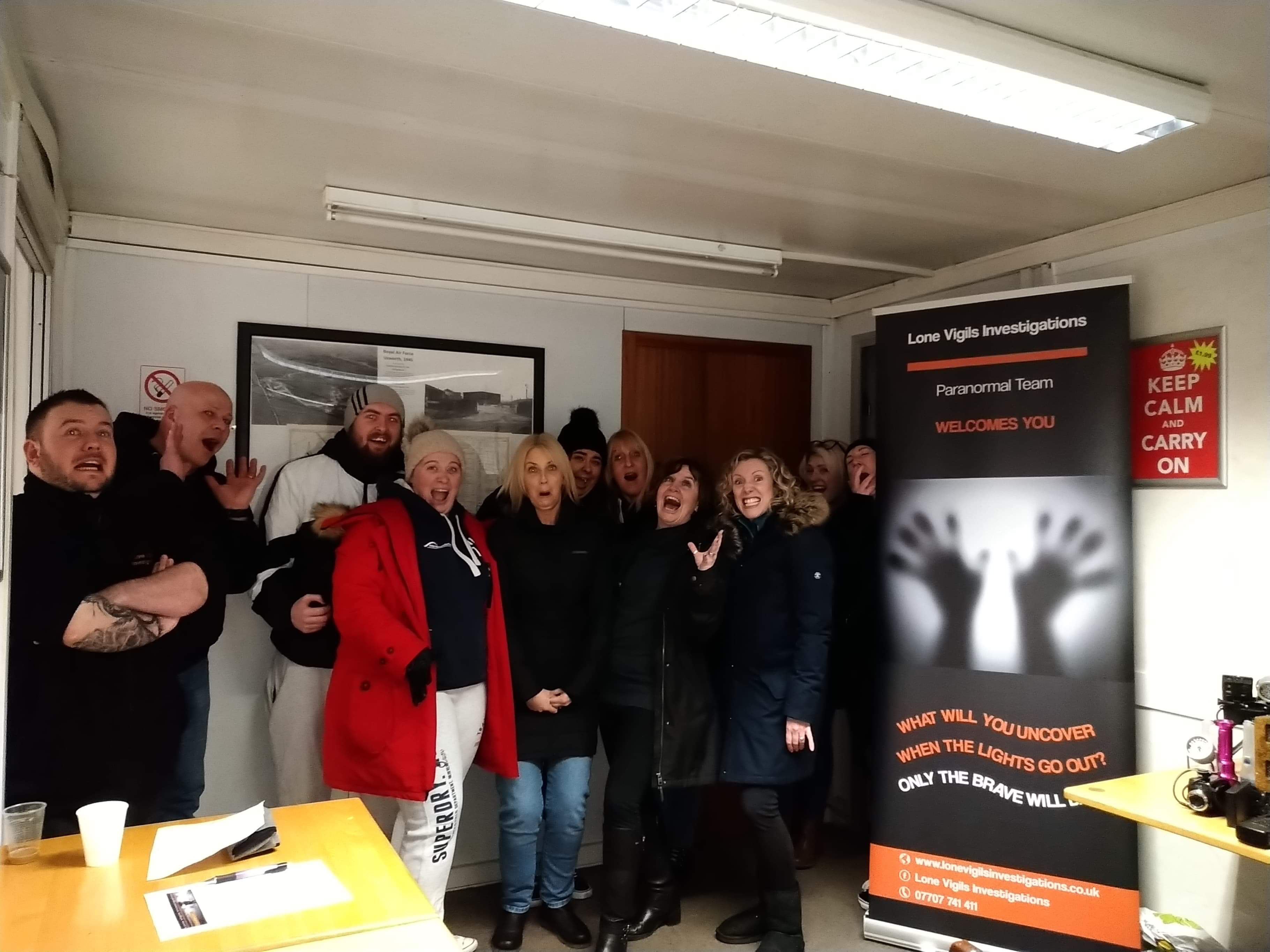 
We started the night with a live feed in the large hanger and were shown a new sealed area which contained an engine from a plane. It is believed a spirit is attached to this engine and goes by the name of Sgt Shaw. The unit was sealed, no drafts found. There was a small compass which we were told moves on its own. We decided to give this a go before welcoming our guests. Cam asked if Sgt Shaw was with us, the compass did indeed move. A few more questions were asked and the compass moved as if responding to our requests. This was caught on the live feed.
When the guests arrived, we carried out a white light protection in the main hanger, followed by a call out. No equipment was used at this time. We heard a few taps and one of our guests picked up on the name 'John'. After 30-40mins, activity was quiet so we moved on to the military vehicle hanger.
In the military vehicle hanger, we introduced ourselves to the spirits and proceeded with a call out. We could hear shuffling sounds coming from the far end and 2 of the guests saw movement from the bottom left corner but there were no team members or guests there. We decided to a ouija board session. During the session, a few photographs were taken and on a couple we can see what looks like a person standing in front of a jeep, but gone on the next photo, and also on the same photo another figure on the left hand side in the bottom left of the hanger, where the guests saw movement. This figure is white and you can see legs, they're also blocking out the green fire exit sign. There were no guests at either of these locations in the hanger. The photos will be posted. What do you see?
We didn't get any activity on the ouija board so we decided to move into the tram hanger.
In the tram hanger we heard a few taps, shuffling and a disembodied 'moan/cough' which sounded male. We carried out a call out, no equipment. A couple of guests took some photographs, one in particular was quite eerie. We were so cold by this point, we decided to go for a cuppa to warm through. We showed Keith, the guys who looks after Nelsam, the photos and he confirmed them with similar photographs. I put an Evp recorder in the vehicle hanger while it was empty, during our small break.
After the break, some guests went back into the tram hanger, main hanger and some into the military vehicle. I (Cam) was with the guests in the main hanger. The compass which had moved earlier, never moved. We tried an SB7 spirit box session while David went live on facebook.
Quite a few names came through on the SB7. John, Donna and Harris. Also we were told there were 8 spirits with us.
The guests continued with the SB7 in the military vehicle hanger, with surprising results which one of the guests recorded on their mobile phone. One guest had to go back to base at this point as they were feeling unwell.
The helicopter hanger had similar results with the same names coming through. The rempod also went off once after being placed inside in the helicopter.
Cam and a few other guests witnessed movement at the far end of the tram hanger and heard disembodied voices, so we put a doll with a K2 meter on the steps near an old bus and also an Evp recorder. We returned after 20mins with the laser grid and the sound enhancement headphones but nothing else was heard.
We decided to do one last push with the rest of the guests in the main hanger. They were getting some great responses using a compass navigation app, they also witnessed a mobile phone move on the table without being pushed. Another ouija board session returned no results. By this point everyone was freezing from the cold so we decided to wrap it up with 2mina to spare.
All in all it was a fairly quiet night but we did get some good results using the SB7 spirit box and some amazing photos.
If any of our guests wish to share their evidence, please feel free to send them to us.

Thank you to everyone who attended for your great energy given and we look forward to seeing you in the future. Thank you to Keith and his Co-host David for having us and their wonderful hospitality as ever. GO TEAM NELSAM