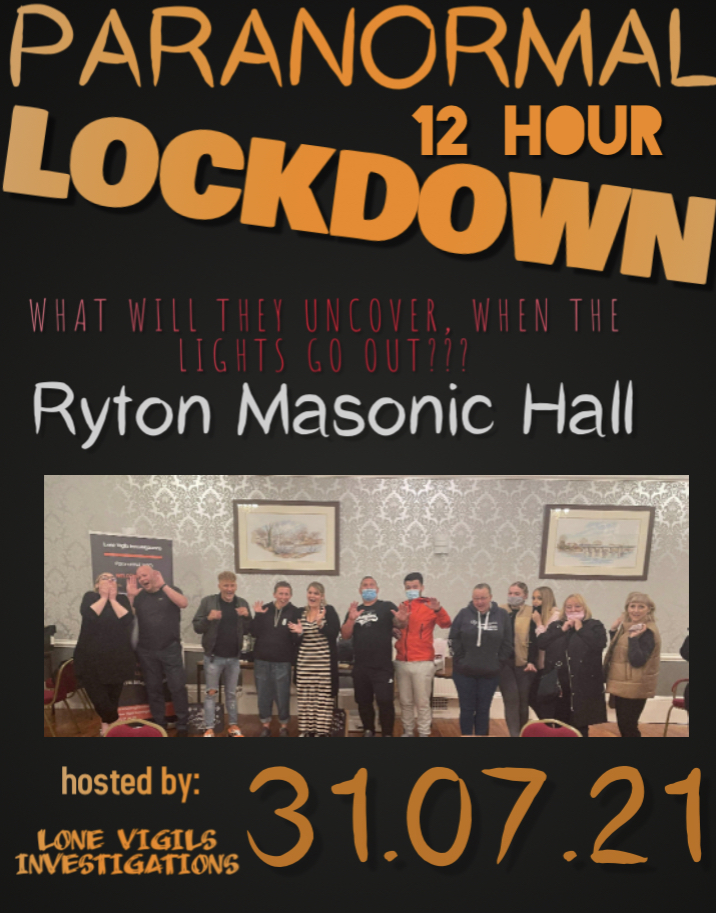 
We started the night in main function room downstairs, i delivered the introduction and the white light protection to all the guests.
we then as a large group went upstairs into tbe Masonic hall, we started to call out into the room, 3 female guests sat in the thrones around the room and we called out again.
guests and team members who had been to the location before called out names and ranks of sprits they had incontestable before.
there were cold spots and movement felt around the chamber as the room got darker.
we then decided we to make a huge circle around the rug in the centre of the room. We all held hands (which we sanitised afterwards) to try and ramp up the energy in the room. Again we felt cold spots and movement around the room and the circle.
We then decided to go for a little break, and recharge our batteries before splitting off into smaller groups.
Myself and 4 female guests took a board up into one of the room on the second floor. Another group went into the Brigadier bedroom with Tim.
We quickly discovered that the male sprits of the building weren’t too keen to speak with females using the equipment, but we did hear noises coming from the other side of the wall as if someone was in there moving objects around as if you were sorting out a cupboard, upon investigation the room was empty. This room is we’re the Masters would change into thier robes for a ceremony.
The other group had more luck though, with spritis from the building as well as sprits relating to one guest in particular coming though on the board.
My group then headed back into the Masonic chamber again, and Tim joined us.
We attempted to use the board again to comunitcate with an sprits but we had no luck even though there was a male presence there.
We sat in the chairs, used the gavels, looked at some the of artifices that were in the room but even this didn’t stir up any activity for us. The room in general felt a lot lighter in energy and we felt a lot more relaxed in there.
We then decided to have another little break, before heading down into the kitchen.
During this time Alan and Emma started there experiment in the Masonic Hall.
In the kitchen we experienced huge cold spots and very high EMF spikes when all our phone ect were in flight mode.
As we were leaving we heard footsteps and the voices of two women talking.
We then teamed up with another group and heading up in to the Brigaderes wife’s bedroom.
We used the board and but a male guest had to asked the questions when the sprits of former Mason’s came through to talk to us.
We spoke to a gentleman that was a level 5 Mason and also a gentleman named Doug who may have been a caretaker in the building in the 1970’s.
A female guest using the board also got some more personal messages regrading a recent job change.
We then all teamed up again as one big group to give the Main hall one last go, the air felt heavy like it did at the beginning of the night.
Some guests used a board again and some of the information that was gathered in the earlier experiment was given again.
We also felt more shadow movement around the room, as well as some taps and bangs as information that Alan and Emma for from thier experiment was called out.
We then brought the night to a close around 3:30 am and most of us slept in the room were we set up our base for the night.
One female gues my slept in the lounge across the main hallway but we had both door wedged open for safety.
Alan and Emma slept in the Masonic chamber on the second floor.
During the night i was awoken by the sound of crying, it was a female and it was coming from the staircase, this was also heard by another guest during the night and we talked about it the next morning while we were packing up the equipment.
Myself and another guest also saw someone walk past tbe doorway and go up the stairs, so we followed it up the stairs but could not find anyone.
As we were all on our way out of the building, Tim and another guest also noticed a figure in the landing area.
Thank you to all our guests for helping make the night what it was. We look forward to seeing you all again soon
GO TEAM RYTON
lonevigilsinvestigations@gmail.com