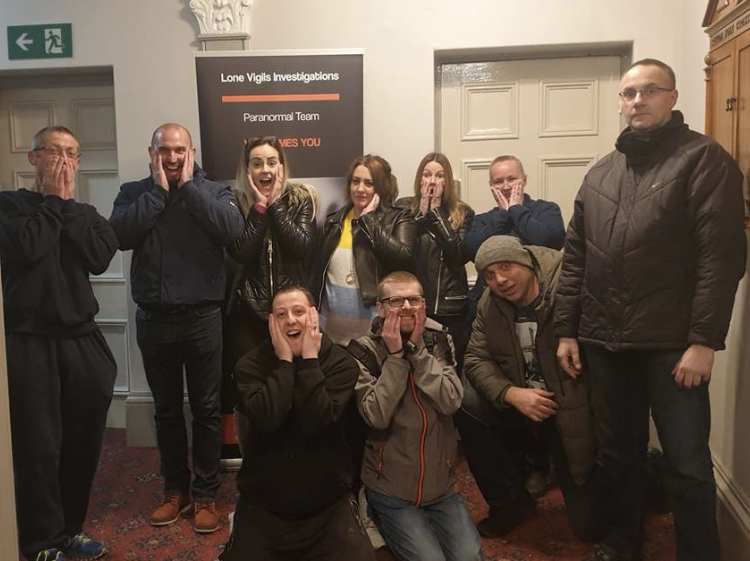 We began our night with our protection of white light which led then straight into introducing ourselves too the spirits of the building. The SB-11 then was brought out and few responses came through with a guest holding the device at the time, her name coming through clear as day. A member of the group then proceeded to ask out where we were and a response came through responding with the name of the building. A flash of light was caught in the corner of the room by a guest & member of the team. We also had temperature spikes & drops with guests feeling these physically on themselves. With a possible connection with a child spirit the boo bear & k2 meter were placed in the middle of the group & activity was on response when asking questions out.

We then proceeded upstairs with 3 of our 1st timers braving it alone with the portable SLS camera which picked up the possible connection of the child spirit as a small figure was mapped out but then dispersed as quick as it had appeared. In the main lodge room we got ourselves comfortable and vibrations on the floor were felt as well as a sense of a shadow figure in the corner. Our portal spirit box was brought out to the session and as we started to ask out questions a clear sigh was heard by the ears of all that was in the room at the time. Tapping was heard by all aswell as responses on the portal spirit box and massive temperature drops were recorded on our temperature gun. We then had a massive loud bang on the floor which everyone responded to as we all thought someone had tripped over & this was also heard by the 1st timers downstairs whilst they were on there own. A guest also experienced a feeling of the chair been touched at the back as they sat down.

We then moved into 1 of the back rooms where we proceeded to do a ouija board session which didn't last long as we had to close it down due to a spirit posing as a member of a family bereavement linked to a guest. As this was going on we proceeded with a Facebook live feed with the 3 gentlemen in the lodge hall which can be seen on our page.

We then moved into another back room of the building where we started up a table tipping session which needed a member of the team to leave the room as a feeling of anger had engulfed there state of mind. As this happened taps were being heard in the corner of the room aswell as the k2 meter going off in the middle of the table. A sense of a tall man stood behind a guest was felt also and a guest being affected which led them being taken out the room as a sense of an overwhelming feeling took hold of them and at the same time as this happening a shadow figure seen flicking towards this guest. Another guest got a emotional & sickness feeling as this was happening. This then led to the table starting to move & actually physically be pushed off its 4 feet onto the floor aswell as an deep gutteral groan being caught on our EVP as this was happening. Whispers heard between a member of staff and a guest which led them both turning to one another and asking each other if they heard this. This room just had a sense of unease and a overwhelming draining feeling towards all guests.

A trip then to the lower kitchen area had many activities happen with all the attendees in the room at the time. The portable SLS camera played a main part in this room with a child figure being mapped out along with it responding to a question " can you hold my hand " with the childlike figure leaning over and touching the team members hand. We then had another taller figure map out next to a gentleman which then again led to it responding to the question " can you took his shoulder " and its arm extending across and seeing the figure touch the gentlemen in question right on his shoulder. We also had 2 child figure between guests. A name josie was heard on the SB11 box when we asked for the childs name and along with a few unkind words aimed towards the women in the room. We heard movement outside of the kitchen which when checked by the team no one was outside the area at the time and also a loud cough was heard by everyone. The MEL meter also had activity when placed in the middle of the room with temperature spikes and drops.

We have so much activity at this amazing location I'm sure we have possible missed some out but if any guests could comment and rejog our memory would be kindly appreciated as this night at the amazing Ryton Masonic Hall was just unbelievable in the amount of activity we had here. We now cant wait for our 12hr Halloween special lockdown event after having all this activity we had tonight.

Thankyou all for your amazing energy and the 1st timers for braving the night alone and giving it all they had. We look forward to seeing you all again soon