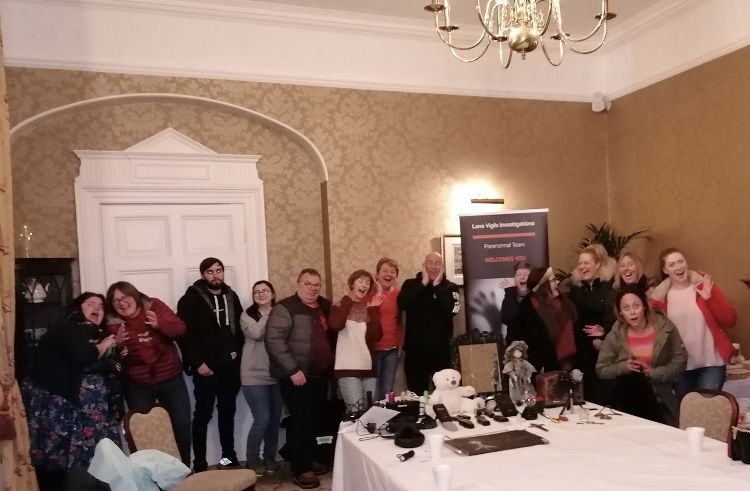 GO TEAM SOLBERGE
Starting the night in base camp we could tell we were in for an interesting night as the lights on the chandelier we’re going brightening and dulling with no identifiable cause, Claire also saw a "white figure" above the hegde whilst on the walk around.

We started the night with white light protection in the spa building. We had feelings of unease, shadows moving around people and many of the group could smell a very strong old fashioned flowery smell and the odd person smelling burning . Apperently it turned out that this part of the building had been restored after burning down. A name of Estelle was picked up and the return of the name George to this locality.

The teams separated with Cam taking a handful of guests to investigate the main rooms which are used for weddings. One of the guests who had an experience in the spa area and picked up on the names John Hutton, Margaret and Caroline, he also called out to cam as he saw what looked like a lady in a white dress walking the grounds and heading towards the bandstand. Cam also saw something similar. With that, the group had a break to recharge and then Cam took a group of people to the bandstand to investigate. We were aware there were paying guests in the hotel so held a smaller call out in the bandstand and also some table tipping. We thought we could see movement towards the large trees so setup the laser grid. After about 25mins, we decided to head back inside to investigate the bar area with the rest of the guests and Claire.

Claire and some guests had decided to go to the cellar with the ouija board. We were asked to leave by an entity, however as we pushed for more information the answers became less coherant and with general feelings of uneasiness, we shut down the board. As we left, a couple of guests stayed, they reported that after about 5 mins of calling out the k2 was responding, feelings of chest pressure and someone blew into a guests face.
With the bar area being quiet some guests tried scrying in the base camp room, we witnessd his face become rounded and older with heavy set eyes. A return to the spa building with the dowsing rods proved interesting with George returning and answering our questions, he identified himself as a butler who served the family who had lived there. With George's energy waning the night came to an end, Team LVI wrapped up for the evening but I'm sure the white lady is still wandering the ground waiting for us to return.

Thank you to all who attended the evening and for helping make the night what it was. We look forward to seeing you again in the future.